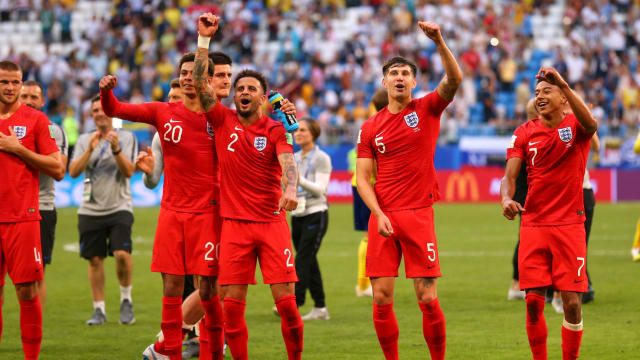 Kyle Walker says there is a family atmosphere within the England camp and that has played a big part in their march to the World Cup semi-finals.

For the first time in 28 years - and only the third time in history - an England team will be present in the last-four at football's global showpiece, Gareth Southgate's team having seen off Sweden in Saturday's quarter-final.

Croatia stand in the way of the Three Lions and a place in the final, the two nations going head-to-head in Moscow on Wednesday to earn the right to face France or Belgium.

England's progress is a long way from their group-stage exit at the last edition of the World Cup in Brazil, and their shock defeat to Iceland in the Euro 2016 round of 16.

And Walker says the spirit within the squad has played a huge part in their improvement.

"Listen, it doesn't matter where you're from. I think everyone is so close in there. It's special. It really is. That's the only word I can describe it because we're all a family," he told Sky News Radio.

It's almost time for our final session ahead of the #WorldCup semi-finals. Get involved at https://t.co/RAe2xMao3g from 8.15am BST. #threelionspic.twitter.com/GS6OikPB0m

"I said at the start of this that over this summer, this is our family.

"You obviously have got your family at home and the kids that you need to keep in touch with, keep checking in or the missus might go mad. But this is our family now.

"Hopefully we had a long month together, which we have done. And we've completed a World Cup. We have completed it.

"If we get to the final or if we don't get to the final then we're one day short, you know it has been an absolute pleasure of an experience to share not just with the players but the staff."