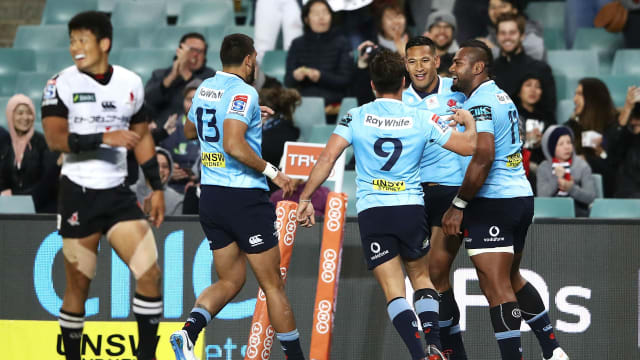 The Waratahs thrashed the 14-man Sunwolves 77-25 to clinch top spot in Super Rugby's Australian Conference and a post-season place in style.

Braces from Israel Folau, Taqele Naiyaravoro and Alex Newsome contributed to a 12-try rout on Saturday to ensure the Waratahs' season will continue beyond the end of next week.

The Sunwolves improbably led for large periods of a balanced first half, but tries from Kurtley Beale and Folau turned the match in a frantic spell that then saw Semisi Masirewa sent off for a challenge on Bernard Foley on the stroke of the interval.

Leading 24-18 at the break, the Waratahs accelerated out of sight after the restart, crossing three more times before Akihito Yamada got his second try - the Sunwolves' final score - 25 minutes from time.

And it went from bad to worse for the visitors when Fumiaki Tanaka was sent to the sin bin with 10 minutes remaining, allowing the Waratahs to add a further three tries to an already lopsided scoreline, breaking the side's record for points in a Super Rugby match.

New Zealand's Chiefs were already assured of ending the season in the top eight, but a hard-fought 24-19 win over the Brumbies all but ended their opponent's bid to reach the finals.

The Brumbies, chasing a fourth straight win to keep their late push alive, recovered well after trailing by 19 points with less than 20 minutes remaining, but Thomas Banks' try and Henry Speight's second of the match could only rescue a bonus point.

Nathan Harris, the influential Damian McKenzie and Jonathan Faauli all crossed for the Chiefs.

FULL TIME: We take the win! Next up a HUGE home NZ derby against the Hurricanes on Friday evening - you do not want to miss this one! #CHIvBRU #ChiefsMana pic.twitter.com/P09iGgwfgH

Ngani Laumape scored a sensational four tries as the Hurricanes defeated the Blues 42-24 to move five points clear of the Chiefs again ahead of the sides' derby meeting next week.

Julian Savea and Beauden Barrett joined Laumape on the scoresheet, while brothers Rieko and Akira Ioane crossed for the Blues, the former getting a brace.