Bulls rally to beat Jaguares as Stormers see off Sharks 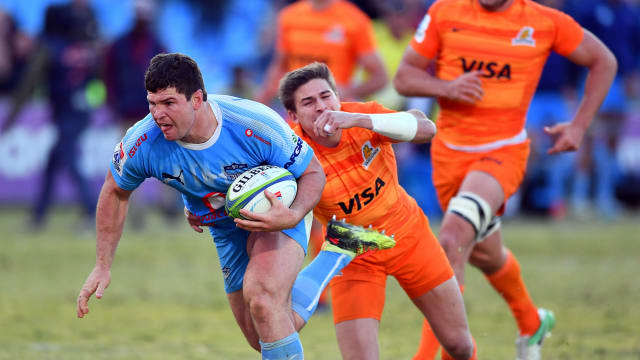 The Bulls recovered from a rapid Jaguares start to win 43-34 in Super Rugby on Saturday, while the Stormers saw off the Sharks at home.

Nicolas Sanchez, captain Pablo Matera and Gonzalo Bertranou scored tries, two of them converted, to open up a 19-0 advantage for the visiting Jaguares inside the opening 20 minutes at Loftus Versfeld Stadium.

Johnny Kotze, Embrose Papier and Jesse Kriel went over and fly-half Handre Pollard added the extras to see the South African franchise take a narrow 21-19 lead into the half-time break.

Bertranou touched down again in the 46th minute and Sanchez slotted the conversion, but a brace of tries from Jamba Ulengo - together with a score from Marco van Staden - afforded the hosts a degree of comfort.

And Matera's second try of the match arrived too late for the Argentine side to close the gap, as their seven-match winning streak came to an end.

HIGHLIGHTS: 2018 Super Rugby Week 18: Bulls v Jaguares@BlueBullsRugby gave their fans something to cheer about in the last game of their home campaign after upsetting @JaguaresARG 43-34 at Loftus Versfeld on Saturday.#BULvJAG#Week18#SuperRugby#BullsFamily50Kpic.twitter.com/wxgcDttlFC

After Robert du Preez kicked three penalties before the break to keep the visitors in touch, Kobus van Wyk ran in a 43rd-minute try, which fly-half Du Preez converted.

But two late Joshua Stander penalties made the result safe for Stormers.