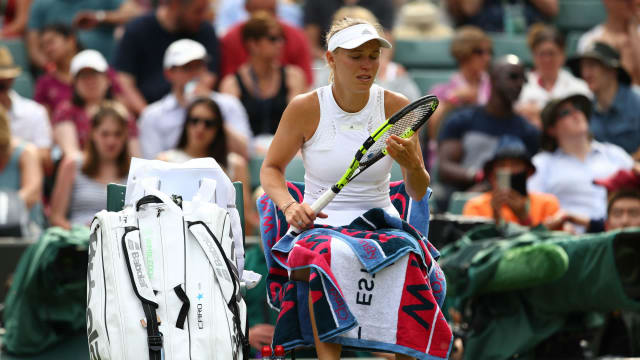 World number two Caroline Wozniacki was the latest big name to tumble out of Wimbledon as she lost 6-4 1-6 7-5 to Ekaterina Makarova in the second round.

Wozniacki won the Nature Valley International title at Eastbourne last week, but she has never been beyond the fourth round at the All England Club and largely looked off the pace throughout on Wednesday, joining pre-tournament favourite Petra Kvitova in making an early exit.

The Dane, who claimed her first grand slam title at the Australian Open, was undone by the powerful Makarova in the opener, the Russian holding off a fightback to clinch the set with a forehand winner down the line.

And Wozniacki then spent much of the second set complaining about the conditions on Number One Court, even as she came roaring back into the contest.

On her sixth match point, @katemakarova1 defeats Caroline Wozniacki 6-4, 1-6, 7-5 to eliminate the Dane from #Wimbledonpic.twitter.com/jsWlHdeOVZ

The second seed grew frustrated by the vast number of insects buzzing around the arena - telling the chair umpire "I am here to focus on playing tennis, not eating bugs", while she appeared to be struggling with her footing on a slippery court later on.

Makarova rallied but squandered four match points and gave up a two-break lead, before finally brilliantly sealing victory with a lengthy rally to set up a contest with Lucie Safarova.

With Wozniacki and Kvitova - a two-time champion - both out, the likes of French Open victor Simona Halep, defending champion Garbine Muguruza and Serena Williams will fancy their chances of going all the way.