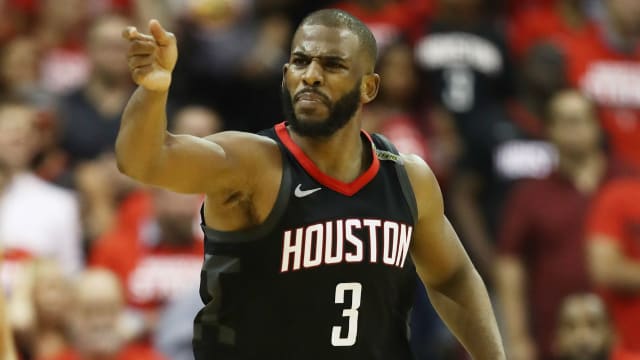 Day one of the NBA's free agency period saw a number of huge deals reportedly agreed, while Chris Paul confirmed he will remain with the Houston Rockets.

According to multiple reports, Paul has agreed a lucrative four-year max salary deal with the Rockets, worth $160million.

While details of his new contract are yet to officially confirmed, Paul took to Twitter to announce he was staying with the team who were edged out in the Western Conference finals by the Golden State Warriors.

"UNFINISHED BUSINESS ... RUN IT BACK," wrote Paul alongside an image of him in action for the Rockets.

Paul George and Kevin Durant are set to remain with the Oklahoma City Thunder and Warriors respectively, after they also reportedly agreed new contracts.

We take a look at those deals and some of the other biggest moves so far.

Having been linked with the LA Lakers, George has now committed to the Thunder by agreeing a four-year, $137m deal, according to ESPN.

Durant, meanwhile, is reported by ESPN to have committed to a one-and-one deal to stay with the Warriors, worth $30m for the 2018-19 season and $31.5m for the second year, which contains a player option.

According to multiple sources, Nikola Jokic will sign a max deal with the Denver Nuggets, worth $148m over five years.

The New York Times says DeAndre Jordan, who was linked with the Warriors, will sign a one-year, $24m deal with the Dallas Mavericks after opting out of his contract with the LA Clippers.

Trevor Ariza, meanwhile, is reportedly joining the Phoenix Suns on a one-year contract worth $15m.

LeBron James, of course, remains the biggest story of free agency, as the world waits to see where the game's biggest star will end up in 2018-19.

Joel Embiid of the Philadelphia 76ers is seemingly keen to link up with LBJ and suggested a move to the Lakers would not make sense for the 33-year-old.

In a Twitter post, Embiid wrote: "The Lakers are FOREVER gonna be Kobe's and Magic's team.... Process that.."

The Lakers are FOREVER gonna be Kobe's and Magic's team.... Process that