Lewis Hamilton would understand if Fernando Alonso retired at the end of 2018, although he believes the two-time former champion is not the only Formula One driver who could be frustrated by an unbalanced competition. 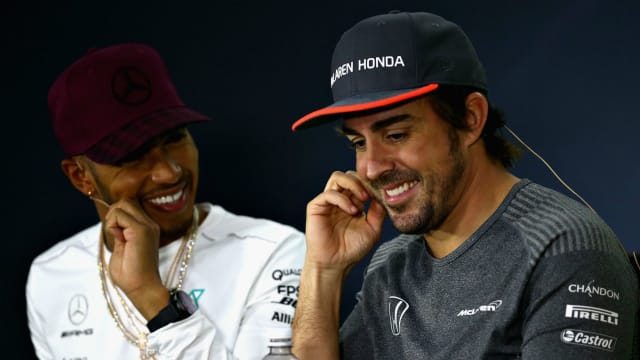 Alonso was a world champion twice with Renault, a team with whom he spent two spells sandwiched by a one-year stint as Hamilton's McLaren team-mate, and was second in the drivers' championship three times with Ferrari.

But he has been unable to contend in a consistently uncompetitive car in his second spell with McLaren.

The Spaniard has competed in the World Endurance Championship this year and, after winning the 24 Hours of Le Mans, delighted in being able to race "with a competitive car".

And Hamilton could understand if Alonso brought an end to his F1 career, even if he does not think the competition has been more unfair to him than any other driver.

"I would understand [if he retired], for sure," Hamilton told AS.

"Do I feel that the sport is not right? Yes. We have big and small teams and there are two seconds between the first three teams and the fourth.

"Ferrari can spend more money than Mercedes, Ferrari can veto all the rules, nobody else can. It is definitely not perfectly configured.

"It could be great and I hope that, when they make the new Concorde Agreement, it will be better for the smaller teams so that they can have a better platform for the younger drivers.

"It should not only be wealthy drivers coming in and I do not mean only in Formula One. It is the same in all disciplines. You only have rich children who come in now, where it should be talented people."