No Ibrahimovic, no problem for Sweden as last 16 beckons 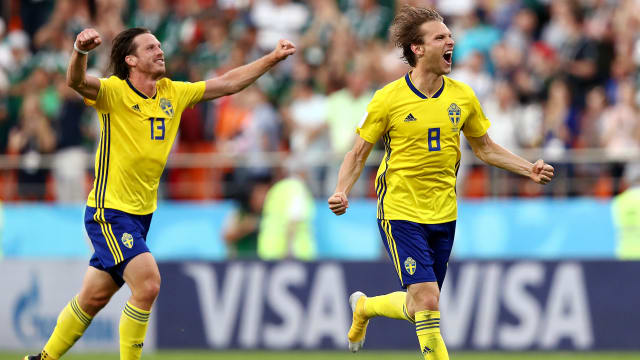 "In the beginning, the first games were different because I felt I can do it much better than them, obviously. And still I feel that."

Zlatan Ibrahimovic questioned Sweden prior to their must-win encounter at the World Cup.

Sweden's most decorated player, all-time leading scorer and more. Away from the international spotlight and on the sidelines.

Despite stunning Italy in the play-offs, not many expected Sweden - without Ibrahimovic - to advance from Group F in Russia. Their team - lacking the individual quality of reigning champions Germany and Mexico - were tipped to say farewell to the tournament before the knockout round.

But Sweden have shown unique unity and skill of their own to make it to the round of 16 for the first time since 2006 - an achievement sealed by Wednesday's 3-0 win over Mexico.

Janne Andersson's men were unfortunate to walk away empty handed from last week's clash against Germany. Sweden troubled the titleholders throughout in Sochi and should have scored more than one goal before Toni Kroos broke their hearts at the death.

Sweden were deflated post-match. Walking through the mixed zone, they could not hide their disappointment - Manchester United's Victor Lindelof almost in tears.

2 - Andreas Granqvist is the first Sweden player to score 2+ goals in a single World Cup since Henrik Larsson in 2002 (3). Converted. #SWE#MEX#MEXSWE#WorldCuppic.twitter.com/YuKCs3FpYS

But Sweden did not drop their heads. Having been on the verge of qualifying within two games, the Europeans produced their best performance of the World Cup to top the group.

Sweden controlled the fixture in Ekaterinburg. Aside from Carlos Vela's delightful effort in the first half, they were hardly troubled by the free-flowing CONCACAF giants.

Ludwig Augustinsson, another Andreas Granqvist penalty and a freakish own goal saw Sweden score more than two goals for the first time in 12 matches.

Not known for their goalscoring exploits, Sweden showed they can attack and they did so with great effect against an underwhelming Mexico outfit.

Sweden appear free. Free from the shackles and looming shadow of Ibrahimovic.

No Ibrahimovic, no problem for Sweden.