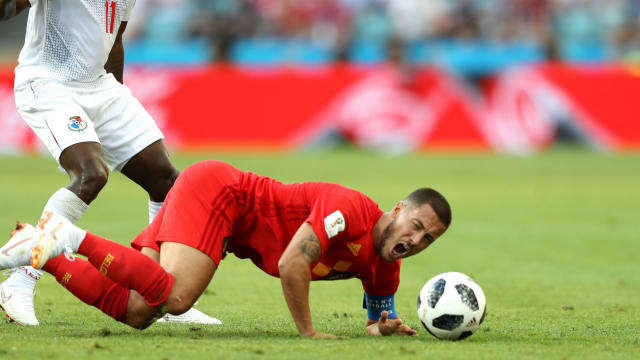 Belgium opened their campaign with a 3-0 victory thanks to Romelu Lukaku's brace and Dries Mertens' stunner in Sochi, though they were made to work for it by newcomers Panama at Fisht Stadium.

There were robust challenges flying in from Hernan Dario Gomez's side, especially in the first half - Belgium captain and superstar Eden Hazard bearing the brunt of the rough treatment.

Hazard's left leg was strapped post-match, though the attacker played it off when talking to reporters.

When Courtois was asked about Panama's tactics, which resulted in five yellow cards, he said: "We knew they are aggressive. They give unnecessary kicks. I think the referee gave enough yellows. I think even sometimes he could let the play go on a bit more. I guess he knew he had to stop it quickly.

"It's football. There's contact and tackles. But if it's cheap tackles that can hurt then officials have to be careful and act.

"But it's a contact sport. You can always be late and its part of football. But when it's unnecessary and cheap then maybe [there could be more protection]."

3 goals and 3 points to start our @FIFAWorldCup journey !
See you in Moscow @Fanclub1895

Courtois continued: "You want beautiful football with the best players on the pitch. It would be sad that players get kicked off.

"Maybe sometimes they were late but this was because they were so fast. There wasn't so many cheap shots or dirty tackles. It's part of football."

Belgium were without regular skipper Vincent Kompany due to injury, though the Manchester City defender remains on track to appear in the group phase.

Dedryck Boyata deputised in a defence that also included Jan Vertonghen and Toby Alderweireld, and Courtois was happy with what he saw.

"I think it worked out. The players have known each other for years. I think we did well," the keeper said. "Obviously there are tough games and World Cups are never perfect. We held on well and took our chances."