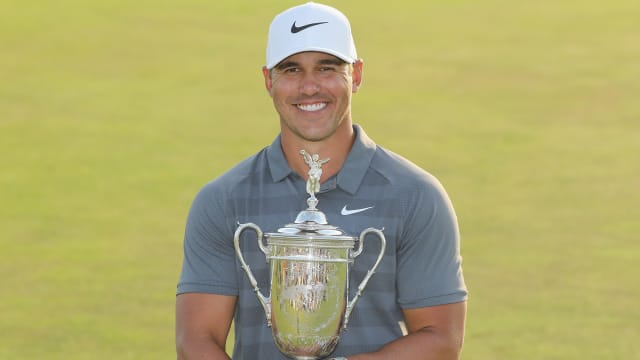 U.S. Open champion Brooks Koepka added his name to the list of players successfully defending a major with his win at Shinnecock Hills on Sunday.

The American became the first man since Curtis Strange in 1988 and 1989 to win back-to-back U.S. Open titles.

But defending a major crown has proven difficult at each of golf's top events, with Koepka just the fourth man to do so since Strange's success.

Omnisport takes a look at the others, as Tiger Woods' greatness is illustrated once more.

Only Woods has gone back-to-back at Augusta since Faldo managed the feat. The Englishman claimed his second and third majors with his successes in 1989 and 1990. Faldo needed play-offs for both of his victories, beating Americans Scott Hoch and Raymond Floyd. He went on to win three more majors, including his last at the Masters in 1996.

If there was a need for a reminder of Woods' greatness, the American has gone back-to-back at majors four times in a period during which only three others have managed to do it even once. Woods' 1999 US PGA success was just his second major title, while his win at the same event eight years later was his 13th of 14. His win at Medinah sparked an incredible era of success, with Woods holding all four majors at once less than two years later.

Harrington won all three of his majors in the space of two years. The Irishman is the last man to defend The Open title after his wins in 2007 and 2008. After beating Sergio Garcia in a play-off at Carnoustie Golf Links - which hosts this year's tournament next month - Harrington went back-to-back with a four-stroke victory at Royal Birkdale a year later.

Koepka added his name to the list of players retaining their major title with his one-shot win at Shinnecock Hills. The American broke through for a dominant win at Erin Hills last year, but his success in New York was perhaps even more impressive. Koepka overcame a poor start to see out a fine victory in difficult conditions.

A two-putt bogey on the 72nd hole does it. @BKoepka is the 118th #USOpen champion, and the first back-to-back champion since 1989! pic.twitter.com/DaWUiRGHCw