Once a year is not enough! - Alonso loved Le Mans bow 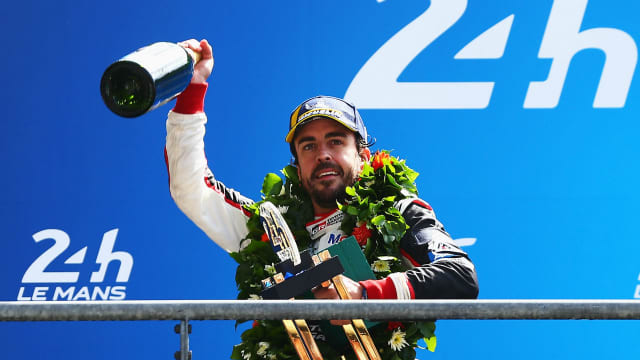 Fernando Alonso loved his triumphant 24 Hours of Le Mans debut so much he wishes he could do it every three weeks.

Two-time Formula One champion Alonso is competing in the World Endurance Championship (WEC) alongside his usual commitments this year and took a step towards motorsport's 'Triple Crown' with glory at Circuit de la Sarthe.

Having won the Monaco Grand Prix, the Spaniard just needs success the Indy 500 to complete the feat only previously achieved by Graham Hill.

Alonso relished the opportunity to help Toyota to victory, so much so that he cannot wait until next year to go again.

"Le Mans once a year is not enough! It needs to be every three weeks," Alonso joked.

"I felt great. I don't know exactly how, but I managed to make the tyres work for us at the right time despite the cool air temperature.

"I've always had enormous respect for this race and I didn't expect to go after the win in my first participation."

The Six Hours of Silverstone is up next in WEC, while Alonso will be back in F1 action at the French Grand Prix in seven days.