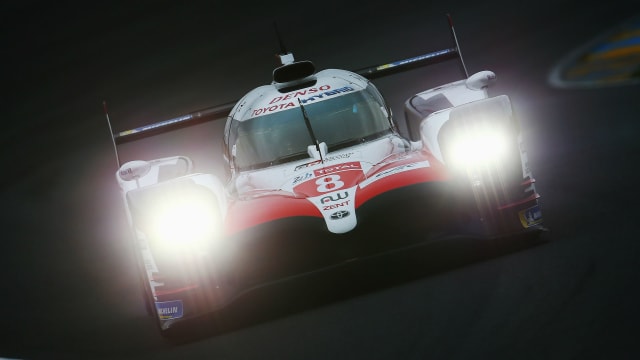 Fernando Alonso moved one step closer to completing motorsport's famous 'Triple Crown' with victory at the 24 Hours of Le Mans on Sunday.

The Spaniard helped end Toyota's wait for success at Circuit de la Sarthe, as he combined with team-mates Sebastian Buemi and Kazuki Nakajima to triumph in the famous endurance race.

Having already won the Monaco Grand Prix twice in his Formula One career, the Spaniard just needs to claim the Indy 500 - which he retired from on his debut in 2017 - to win all three classics, a feat only previously achieved by Englishman Graham Hill.

There was no joy for another former F1 champion, though. Jenson Button's BR Engineering BR1, which included Vitaly Petrov and Mikhail Aleshin, was pulled from the race in the final hour.

Toyota had to overcome a 60-second penalty earned by Buemi for speeding in a slow zone to triumph at the 19th attempt.

He's done it! @alo_oficial WINS the 24 Hours of Le Mans! Congratulations to him and his Toyota teammates. #LeMans24pic.twitter.com/WOupaDBEat

Nakajima - who had clinched pole position - finished in the car, the Japanese driver enjoying a moment of redemption after a technical problem cruelly denied him and Toyota victory in the closing stages two years ago.

Alonso has combined competing in the World Endurance Championship (WEC) for Toyota with his F1 duties.

He will be back in action for McLaren at the French Grand Prix next week, with the race returning to the calendar for the first time since 2008.