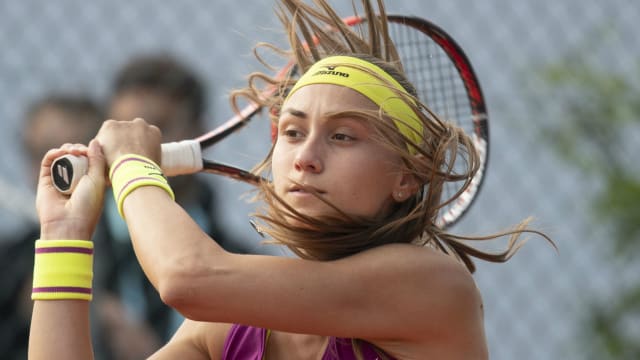 Aleksandra Krunic was proud of herself after battling from a set and a break down, and saving match point before defeating Coco Vandeweghe at the Rosmalen Grass Court Championships.

Top seed and two-time champion Vandeweghe staved off seven match points in her quarter-final against Alison Riske, but it was Krunic who showed greater resilience to earn a 2-6 7-6 (7-4) 7-6 (7-1) triumph on Saturday.

The Serbian saved two break points in the second that would have put her opponent in position to serve for the match, fighting on from there to set up a final against Kirsten Flipkens, who beat Viktoria Kuzmova 7-5 6-7 (7-9) 6-4 after passing up four chances to close out the match in the second set.

"I'm a little surprised, proud of myself and verry happy. She's an awesome player and very powerful, and it's challenging for me to play against those players," said Krunic.

"I was very happy that I was able to fight because I was a set and a break down and it's never easy - especially against Coco."

Top seed Ashleigh Barty won in straight sets for the fourth time in succession as she overcame Naomi Osaka to reach the final of the Nottingham Open.

Johanna Konta stands between her and the title after the home hope beat defending champion Donna Vekic 6-2 6-3.