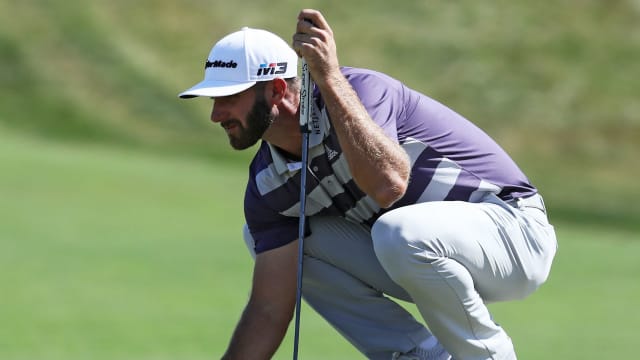 Dustin Johnson remained upbeat and said he was still in a "good position" despite a tough third round at the U.S. Open.

Johnson struggled at Shinnecock Hills on Saturday as he watched his four-shot lead disappear.

The world number one, who started his third round at four under as the only player under par, quickly returned to the pack with four bogeys and a double bogey in his first eight holes.

Ultimately, the 2016 U.S. Open champion shot a seven-over 77 to fall to three over for the tournament and into a four-way tie for the lead entering Sunday's final round.

"I'm in a good position, in the lead tomorrow," Johnson said after his round. "Today's round, I didn't feel like I played badly at all, seven over, usually is a terrible score, but with the greens the way they got this afternoon they were very, very difficult.

"I felt like I hit seven or eight putts that easily could have gone in the hole that didn't, and that's the difference between shooting seven over and even par."

The field needed DJ to come back to the pack today. It's happening. #USOpenpic.twitter.com/c6zP9Xqxhe

While Johnson stopped short of saying Shinnecock was set up in an unfair way, he was annoyed by some of the speed changes on the greens.

"I don't know. I mean, for the most part, we all had to play this afternoon. Yeah, it was a little - I felt like the speeds were a little inconsistent," Johnson said.

Even though Johnson relinquished his big lead, he is still tied with Tony Finau, Daniel Berger and defending U.S. Open champion Brooks Koepka. Johnson also hit 79 per cent of his fairways and 72 per cent of his greens Saturday, proving he did have some solid form.

"I felt like I played pretty well," Johnson said. "Couple bad shots, but, I mean, you're going to hit a few bad shots out here. It's just how it goes.

"But still felt like I gave myself always a good - you know, a decent look at par. And three three-putts, that doesn't help. I don't three-putt any today, then I'm right there at even par for the tournament.

"I felt like my speed was pretty good all day. But the flags were in very difficult spots, and just made it really difficult with the wind."