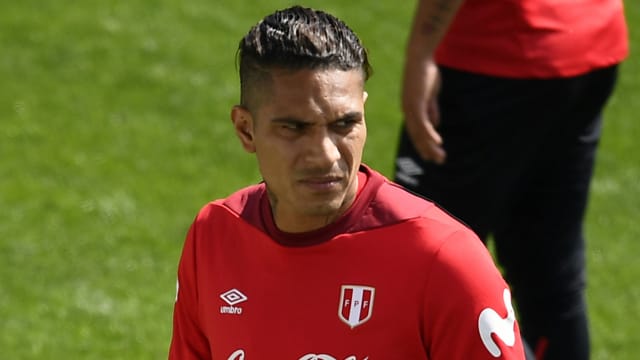 Guerrero was cleared to play at the World Cup when a Swiss supreme court judge granted an interim order to freeze the 34-year-old's 14-month ban, which he received for testing positive for a metabolite of cocaine.

The availability of Guerrero came as a huge boost for Peru coach Ricardo Gareca, who saw his veteran captain score five times in 17 appearances as Los Incas qualified for the World Cup for the first time in 36 years.

Denmark captain Simon Kjaer was one of three players who sent an open letter to FIFA to request that Guerrero's suspension be paused for the World Cup, asking the governing body to show clemency to a player who had worked his whole career to achieve the dream of reaching the finals, and Hareide said the Peru captain would be one to watch.

"He is a classic star player, a strong finisher and really good in the box," Hareide told Bold.dk ahead of the Group C contest in Saransk. "But the question is how much it costs the team in relation to work effort."

Peru's pre-World Cup form has been impressive and they are unbeaten in their last 15 outings under the guidance of former Palmeiras and Independiente coach Ricardo Gareca.

Hareide drew parallels between Gareca's side and his own, having watched them draw 0-0 with Sweden in their final warm-up game.

"We have seen all Peru's matches, including the match against Sweden," said Hareide. "We expect them to continue playing well.

"Like us, they have a strong defence and, like us, have not lost in a long time. When they win the ball, they set off quick counter-attacks."

Denmark's last competitive defeat came in October 2016, when they suffered back-to-back losses to Poland and Montenegro, but Hareide's men recovered to finish second in qualifying Group E before beating the Republic of Ireland 5-1 on aggregate in a play-off.

Hareide underlined the importance of Tottenham midfielder Christian Eriksen to Denmark's chances in Russia, and said his side would be an imposing physical proposition.

"We have Christian Eriksen's good touch and a lot of height and strength," said the 64-year-old, whose most recent managerial honours came when he guided Malmo to a Swedish league and super cup double in 2014.

"We usually do well in set-piece situations and we will continue that.

"We will also find our way into the game and how we can change our approach if needed.

"I think that will be very, very important."

Orlando City midfielder Yoshi Yotun is expected to sit in the heart of Peru's midfield - a position he plays to great effect for the MLS side.

The 28-year-old has scored three goals in 10 appearances for Orlando in 2018 and his ability to turn defence into attack from his role just in front of the back four could be vital to Peru's chances of finding the net in Russia.

One of the most dynamic, creative players in Mauricio Pochettino's Tottenham squad, Eriksen scored 10 goals in 37 Premier League appearances as Spurs finished third in the table in 2017-18.

The 26-year-old was his country's top-scorer in World Cup qualifying, finding the net 11 times, and provided three assists as he found himself directly involved in 56 per cent of Denmark's goals.

- This will be the first ever encounter between Peru and Denmark.

- One of the original participants in 1930, Peru qualified for their fifth World Cup after beating New Zealand in the play-offs. It is their first appearance since 1982, which is the biggest gap of years (36) between participations at the World Cup for any of the 32 teams qualified for the 2018 tournament.

- Denmark have reached the knockout stages in three of their four previous World Cup appearances but never progressed past the quarter-finals (1998).