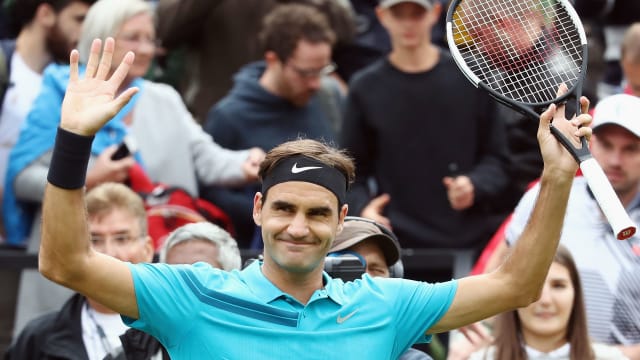 Roger Federer was relieved to have avoided another early exit at the Stuttgart Open after he fought back from a set down to beat Mischa Zverev.

Twelve months ago Federer returned from his mid-season break and was beaten by Tommy Haas on the Stuttgart grass.

When he fell behind on Wednesday another upset appeared on the cards, but Federer - who skipped the entire clay-court swing - came battling back.

As Zverev's level dipped, Federer's found a new gear and after 92 minutes on court he had booked a quarter-final berth.

"Three months is a long time, it's longer than the year-end break, so I'm very happy returning on good terms onto the tour," Federer said after his 3-6 6-4 6-2 win.

Federer breaks his two-match losing streak and starts the -court season with a W.

"It was difficult, I missed some chances in the first set, played one bad service game and he connected well at the right times, and I got behind.

"I think I got a little lucky in the second set when down a set and break points, it was dangerous there for a second and then I found a way.

"I guess I found my rhythm, maybe Mischa didn't play as well after that. I'm very happy with how I played, I'm super happy to be back on tour and it's been a great start.

"It feels good to win again. I've lost my last two matches. So it's nice to get a fresh start here."