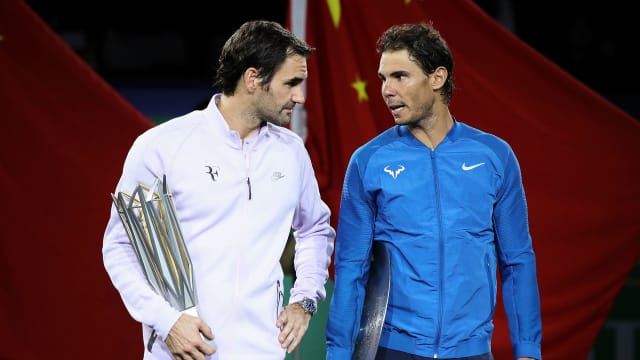 Roger Federer says all players must congratulate Rafael Nadal on his "unimaginable" 11th French Open triumph, but is determined to dethrone his old foe as world number one this week.

Nadal's love affair with Roland Garros continued as the 'King of Clay' registered a 6-4 6-3 6-2 victory over Dominic Thiem in Sunday's final.

It leaves Nadal just three adrift of the 20 grand slam titles won by Federer, who returns to action on the ATP Tour for the first time since March at the Stuttgart Open, having opted to skip the clay-court season for the second year running.

Federer can regain top spot in the rankings by reaching the final in Stuttgart and, while congratulating Nadal on his astonishing achievement, the 36-year-old is aiming high on his start to the grass-court swing.

"I kind of expected Rafa to win the French Open, that's not taking anything away from him but he was again that good on clay leading into the French Open that I thought he was going to win," he told a news conference.

"By him winning it just creates the situation I was expecting, that I have to play the finals here to get back to world number one.

"I think that's a bit of extra motivation but then again, having lost here in the first round [last year] for me it resets the goal as well, just take it one step at a time and don't think too far ahead.

"Not that I did that last year, but on grass margins are very slim and it's not so simple, especially when you haven't played for three months.

"Last time I did that I came back here very strong and my reaction was very good after losing against Tommy [Haas] last year, I didn't drop another set for the rest of the grass-court season which I was very happy about.

"I'm just happy I can find my rhythm and range a little bit earlier but I'm very excited to be here, I'm motivated because of all these reasons and it's been a while, I haven't played matches, so, I'm happy and obviously I don't want to be on a three-match losing streak [Federer having lost the final in Indian Wells before being knocked out in the first round of Miami], so obviously I want to break that as well."

.@rogerfederer can regain the No. 1 #ATP Ranking on 18 June if he reaches the @MercedesCup final.

"I think that's a bit of extra motivation."

Elaborating further on Nadal's French Open win, Federer added: "You can use only superlatives to describe that. To win one single tournament 11 times is unimaginable.

"It looks so easy how he did it in Paris again. I didn't see much from the finals because I arrived here, warmed-up and played by myself.

"But I didn't need to see it to know how strong he is and what amazing things he's achieved. He didn't need to win the tournament to prove that, but he did it anyway with the sovereignty of a champion.

"I think all players on the tour have to congratulate him for his success. Because winning any tournament eleven times is unbelievable."