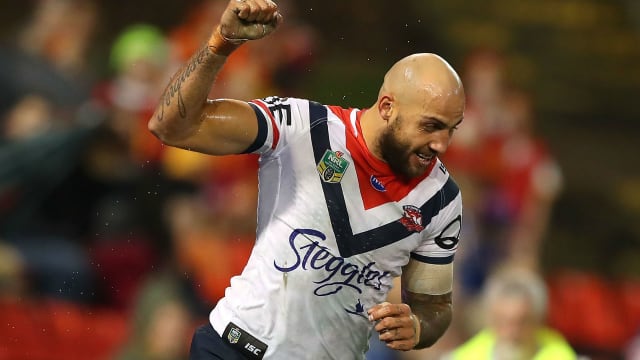 Ferguson continued his superb response to a State of Origin snub by scoring a double in an 18-16 success at Newcastle Knights, adding to his late try-saving tackle against Wests Tigers last time out.

Sydney's Luke Keary and Newcastle's Sione Mata'utia traded early scores, before Ferguson burst through either side of half-time to send the Roosters clear.

Kalyn Ponga's boot kept the Knights in it and his 75th-minute try ensured a nervy finish, but the visitors were not to be denied the two points.

Fusitu'a went one better than Ferguson on Saturday as he scored three times in nine minutes in New Zealand Warriors' 34-14 defeat of Manly Sea Eagles.

The 23-year-old moved onto 15 tries for the season, but he was given a helping hand by fellow Warriors winger Ken Maumalo in a rampaging display that saw him make close to 200 metres in Christchurch.

Apisai Koroisau crossed early for Manly, but New Zealand scored the next six tries without response.

Isaiah Papali'i and Tohu Harris went over ahead of half-time, before Fusitu'a and Shaun Johnson - who kicked five conversions - came into their own after the restart, the former creating a score for the latter in addition to his treble.

That's a hat-trick for Fusitu'a.#TelstraPremiership#NRLManlyWarriors#NRLpic.twitter.com/bgmMyn2oa9

At the bottom of the table, Parramatta Eels ended a five-match losing streak with a 20-14 triumph over North Queensland Cowboys.

Jarryd Hayne ended his wait for a first try since returning to the Eels by scoring twice, while brothers George and Michael Jennings also crossed.

Parramatta held off a late fightback that saw two tries in the final two minutes, the first of which came from the returning Matt Scott.