Knights back on track with Eels thrashing 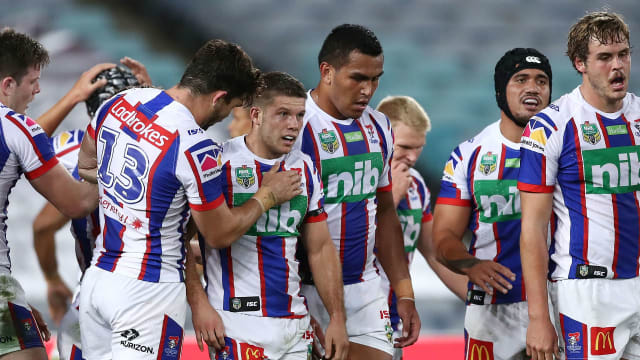 Newcastle Knights boosted their faltering NRL finals hopes thanks to a dominant first win in five against Parramatta Eels.

The Knights were winless in four and had slumped to 12th on the ladder, with the worst points difference in the division, but a trip to the Eels offered welcome relief and resulted in a dominant 30-4 victory.

Jack Cogger pounced on a loose ball to cross early for the visitors, before Danny Levi teed up Sione Mata'utia for a second try shortly before the break, with Kalyn Ponga kicking both conversions and a penalty.

Parramatta did not improve after their scoreless first half - in which both Bevan French and Mitchell Moses suffered injuries - and former Eels star Ken Sio extended Newcastle's lead.

Daniel Saifiti charged through for the fourth try and Connor Watson added a fifth, before Josh Hoffman belatedly got the hosts on the board with a consolation score.

FT | The Knights seal the deal down at @ANZStadium

The Eels' back-to-back wins late in April are now long since forgotten, with the home side rooted to the foot of the table.