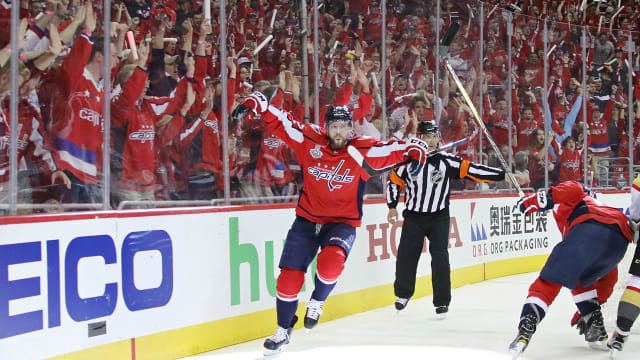 The Capitals received a psychological boost immediately when high-scoring center Evgeny Kuznetsov took the ice on Saturday after being a game-time decision due to injury.

That gave the Capitals all the offense they needed as Kuznetsov tallied an assist and a goal in the second period to see Washington claim a 2-1 series lead.

It was the Capitals' first home-ice Stanley Cup Final victory in the franchise's 44-year history.

The Capitals will host game four in Washington on Monday.

KUZNETSOV SHRUGGED OFF INJURY AND RETURNED IN TOP FORM

Kuznetsov was a game-time decision as he dealt with an upper-body injury that forced him out of game two. Yes, the Capitals are deep and could shuffle their lines to cover his absence for a game, but they are unquestionably a better team with him on the ice. Kuznetsov made his presence felt in the second period with an assist to Alexander Ovechkin for the Capitals' first goal, and he added a goal of his own midway through the period.

The snipe! The bird celebration! The @Capitals make it a pair. #StanleyCuppic.twitter.com/YMgrwEnEmq

The 2016 All-Star has been the top scorer in the NHL postseason, and now has 12 goals and 27 points.

Kuznetsov and Ovechkin (14 postseason goals) are the fourth set of team-mates to score at least 12 goals apiece in the last 20 playoffs.

WHAT HAPPENED TO THE GOLDEN KNIGHTS' OFFENSE?

Vegas tallied 28 shots on goal in the opener and 26 in Game two, but only 22 shots in game three. Many of those were not quality shots this team are used to finding. After scoring six goals in the opener, the Golden Knights have combined for three goals in the last two games. That is a trend Vegas must reverse. The Golden Knights finished fifth in the NHL in scoring in the regular season, but appeared overmatched by the Caps' defense during the past two contests.

FLEURY IS GREAT, BUT HE NEEDS HELP

After all his great years with the Pittsburgh Penguins, goaltender Marc-Andre Fleury might have had his best season with Vegas. Although he unexpectedly yielded seven combined goals in the first two games of the Finals, he was back in top form early in the game on Saturday, making a number of spectacular plays among his 23 saves.

But Fleury needs help. The Capitals seemed to be camped out in the Golden Knights' end of the ice most of the night. That led to several shots no goalie should be expected to stop. Case in point: Kuznetsov's second-period goal on a three-on-one breakaway. Vegas must do more to keep the puck at the other end of the ice and give Fleury a chance to breathe.