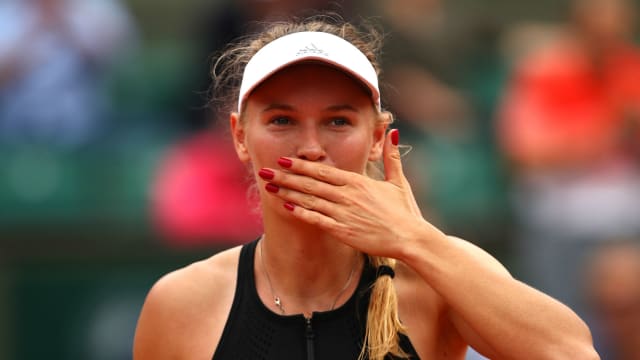 Caroline Wozniacki started strongly but had to overcome a blip to beat Pauline Parmentier 6-0 6-3 in the French Open third round on Friday.

From 6-0 5-0 up, second seed Wozniacki fell short of sweeping to a stunning double bagel, as concerns over the state of the surface on Court Phillipe Chatrier preceded a late surge from home hope Parmentier.

The Frenchwoman was unable to pull off a shock comeback, though, with Wozniacki halting her momentum to book a place in the last 16 against Daria Kasatkina.

The victory provided the world number two with a semblance of revenge after she was forced to retire from a quarter-final clash with Parmentier in Istanbul last month due to an abdominal injury.

Full speed ahead @CaroWozniacki races past Pauline Parmentier 6-0 6-3 in 78 minutes to reach R16.#RG18pic.twitter.com/DZPmnIH1Yp

Wozniacki picked up the first break by forcing an error from Parmentier with a tremendous cross-court shot, and her aggressive play sealed an opening bagel in just 21 minutes - capped by a sweet backhand winner.

Parmentier responded positively by engineering two break points at the start of the second set, but Wozniacki defended brilliantly and was 6-0 2-0 up when there was a brief break due to rain at deuce in game three.

The Dane racked up a ninth game in succession but chants of "Pauline" rang out when Wozniacki buried a forehand into the net to get Parmentier on the scoreboard in game 12.

Wozniacki complained the court was starting to get "slippery" after dropping serve for the first time, and her opponent seized on her discomfort.

However, the second seed finally got the job done with a lovely slice into the corner that Parmentier failed to get back over the net.