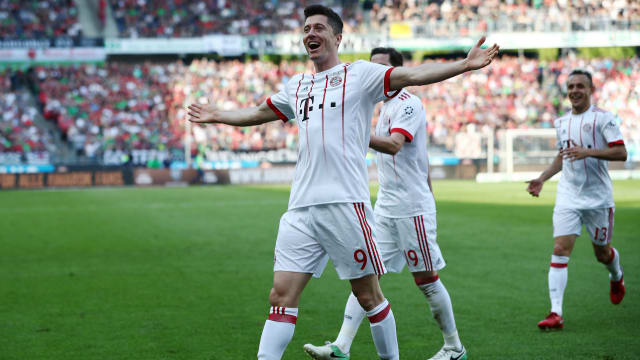 Bayern Munich striker Robert Lewandowski has refused to distance himself from claims he wants to leave the Bundesliga champions.

"Robert feels that he needs a change and a new challenge in his career," said Zahavi, who helped to broker Neymar's world-record move from Barcelona to Paris Saint-Germain last August.

"The leaders of Bayern know about it."

Addressing a news conference while on duty with the Poland national team on Wednesday, Lewandowski looked to sidestep the issue but confirmed his future remains in Zahavi's hands.

It's a great honor to be the top scorer again. Lots of thanks to my team mates, without them it would not be possible! @FCBayern  pic.twitter.com/izfA3fu9EA

"My agent takes care of these things," he said. "I am focused on the preparations for the World Cup.

"That is the most important thing. I do not think about anything else."

Lewandowski is under contract until 2021 at Bayern and has been heavily linked to Real Madrid this season.

"Throughout the season there were many rumours about him, but we all stayed calm, Lewy as well," said Bayern defender Niklas Sule when he spoke to reporters at Germany's pre-World Cup training base.

"From the outside there is always more talk than there actually is inside the team. He was always motivated and scored 30 goals [29] again this season in the Bundesliga.

"What his agent said or what the situation is with Lewy - only he [Lewandowski] knows best.

"But the club will handle this situation. All I can say is that Robert Lewandowski is highly respected within the team, he is a great guy and he always scores goals for us."