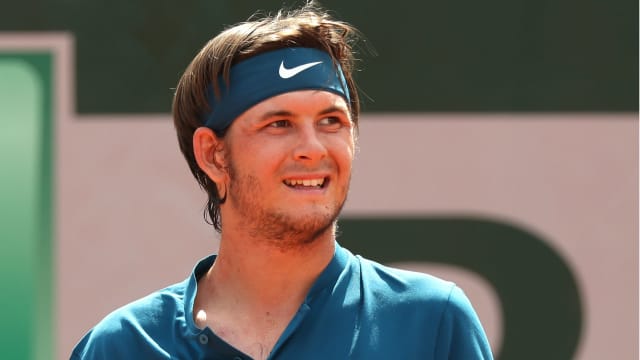 Jared Donaldson caught the eye with an unusual serve at the French Open on Wednesday but was ultimately beaten by Grigor Dimitrov.

The American, who hit the headlines for his confrontation with an umpire at the Monte Carlo Masters last month, attempted an underarm serve after suffering with cramp and remarkably won the point, as Dimitrov sent his backhand return long.

Novak Djokovic's upturn in form continued with a straight-sets win against Jaume Munar, while Alexander Zverev provided the laughs in the press conference room.

But it was the end of the road for Marco Trungelliti, who was beaten by Marco Cecchinato after justifying his 10-hour drive to Paris with a win against Bernard Tomic in the first round.

Discussing Donaldson's underarm serve, Dimitrov said: "I know how it is to feel like you're cramping. So I guess he just wanted to find some other way, and that was that.

"I think it was very smart for him to do that. I mean, I think I've done it once in my career and I think it worked. So when he did it, I was like, okay, now I know how he feels.

"So I knew what it is to be on the other side, and I don't think about it too much, to be honest, when he did it. In a way, I was expecting it at some point."

Djokovic continued his clay court-season resurgence with another straight-sets win at the French Open, defeating Munar 7-6 (7-1) 6-4 6-4.

The former world number one is trying to break a bad run of form and says he is continually having to adapt to changes in his life.

"I have to embrace this kind of situation in life where it's different," he said. "You know, I'm not - and I don't want to be - the same person and player that I was two, three, four years ago.

"It's just different. I have a different life. I mean, I'm a father of two children, and it's a lot of different things that I prioritise in life. It's not only about tennis, which has been the case before.

"So you have to adjust to it, embrace it, and try to find best possible solutions to balance everything and thrive in every aspect of your life."

These guys have got some wheels ?

The battle between Munar and Djokovic rages on.#RG18pic.twitter.com/sdWQYHQvY4

Alexander Zverev provided one of the biggest comedy moments of the tournament so far when he questioned a journalist's unfamiliar accent.

"Do you want to guess? Yorkshire in England," came the reply.

"Nice. If they ever make a tournament there I'm definitely coming, just because of that accent," was Zverev's humorous response. "I didn't understand a word you were saying but it's not important."

Kei Nishikori, David Goffin and Gael Monfils were among the other winners on Wednesday.

"Where you from, buddy?"