With Golovkin talks dragging, Canelo is ready to 'go after someone else' 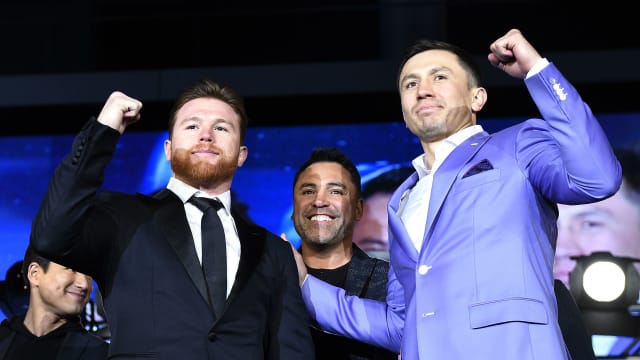 Saul 'Canelo' Alvarez is ready to "go after someone else" if a deal for a rematch with Gennady Golovkin in September cannot be struck.

Canelo and middleweight king Golovkin were due to meet again on May 5 after their first fight ended in a controversial draw, but a positive drugs test for trace levels of banned substance clenbuterol - which he blamed on contaminated meat - resulted in the bout being cancelled.

The Mexican will be able to return from a six-month suspension in September, and the president of Golden Boy Promotions Eric Gomez says a clash with 'GGG' is his top priority.

However, with terms proving difficult to nail down, Gomez made it clear Canelo will look elsewhere if there is no agreement.

"After the hearing we sent GGG's team a contract with terms that were agreed on before," Gomez told Boxing News.

"Then they came back with terms that are impossible for us to accept. It's clear that he doesn't want to fight Canelo. The best way to get out of a fight is to make ridiculous terms. Canelo will fight in September.

Golden Boy founder Oscar De La Hoya also warned Canelo is turning to other options, tweeting: "Canelo is moving on, the only possible way he fights @GGGBoxing in September is on same terms we agreed on after the first fight."

@Canelo is moving on, the only possible way he fights @GGGBoxing in September is on same terms we agreed on after the first fight. #danieljacobs #charlo #sounders

A fight against WBO middleweight title holder Billy Joe Saunders could consequently be on the cards.

"Canelo's willing to fight him, no problem. He has no problem fighting BJ Saunders, we can fight. He can fight Danny Jacobs. There's a number of other guys out there that Canelo can fight," said Gomez.

"We cannot force Golovkin in the ring, but we made it very clear that's the fight we want.

"We are talking to other promoters. There's Danny Jacobs, Billy Joe Saunders, Jermall Charlo, Gary O'Sullivan and even David Lemieux."