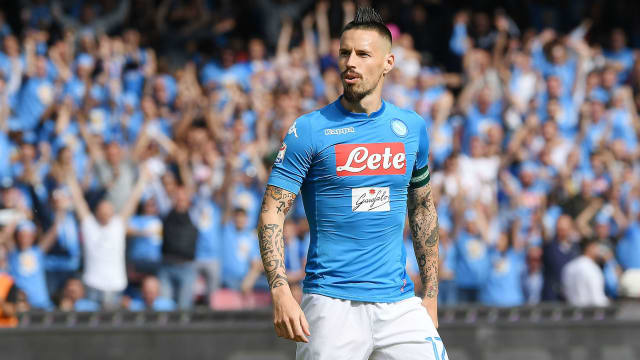 Napoli captain Marek Hamsik will not be allowed to leave for the Chinese Super League on the cheap just because of his 11 years of service, according to president Aurelio De Laurentiis.

Hamsik confirmed on Sunday that he is mulling over an offer from an unnamed CSL club reported to be Shandong Luneng after he helped Napoli mount a genuine Serie A title challenge to eventual champions Juventus.

It has been a turbulent time at the club since the campaign ended, with Carlo Ancelotti replacing Maurizio Sarri and now skipper Hamsik - who joined from Brescia in 2007 - could be following his former coach out of the exit door.

Hamsik admitted to being "tempted" by the move to China, but De Laurentiis looks set to make a departure as difficult as possible for the 30-year-old Slovakian midfielder.

Speaking at the University of Naples Federico II, De Laurentiis said: "I told him [Hamsik]; 'where are you going to go? This is your home'.

"After that it is up to him if he wants to leave the club, but I do not do discounts for anybody."

De Laurentiis also appeared to end any hope of Mario Balotelli joining Napoli, putting faith in those already at the club ahead of the striker, who ended a four-year national team hiatus and scored in Monday's 2-1 win over Saudi Arabia.

"We haven't considered him [Balotelli]," De Laurentiis said. "He is extraordinary, but first we need to consider the possibilities of players who are already here with Ancelotti during pre-season.

"We've got many attacking players, so we cannot harm those who are already here and have never played for Napoli.

"To think the attack is our priority [in the transfer market] would be a mistake. Our priorities are different."