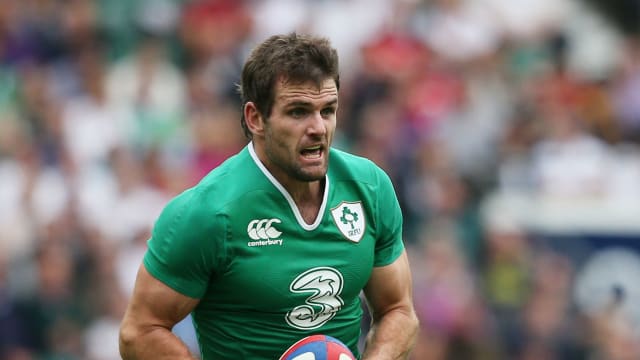 Ireland and Ulster centre Jared Payne has been forced to retire after failing to recover from a head injury suffered on last year's British and Irish Lions tour of New Zealand.

The 32-year-old was hurt in a tour match against the Chiefs on June 20 and has been struggling with headache-related problems ever since.

Consequently, Payne - who earned 20 Ireland caps - will end his playing career and take up a role as defence coach with Ulster, the Pro14 side have confirmed.

"It's been a good ride but unfortunately every good thing has to come to an end," he told Ulster's official website.

"Firstly, I'd like to thank my parents for all their help in my younger years and my brother Josh for being a live tackle bag!

"Thanks also to the coaches and team-mates throughout the years that have made living this dream possible, and to the staff, volunteers and fans that make game days so special.

"The support that I've received from my partner Chrissie and sons Jake and Tyler, particularly over the past 12 months, has been incredible.

We can confirm that Jared Payne has been forced to retire from playing professional rugby and will become our new Defence Coach pic.twitter.com/SmqFnxTO9w

"I would like to thank all of the medical professionals who have supported me since my injury occurred back in June last year. I'm extremely grateful for your considerable care and attention.

"While I will undoubtedly miss the buzz of running out with mates every weekend, I have to listen to the medical advice and unfortunately give up the dream.

"However, I've surprised myself how much I have enjoyed coaching and I'm really looking forward to getting my teeth into this role on a permanent basis.

"Finally, I'd like to thank the management here at Ulster for giving me the opportunity to contribute in this way and I look forward to trying to repay the faith shown in me."