French Open 2018: Doing the unthinkable - the men most likely to topple Nadal 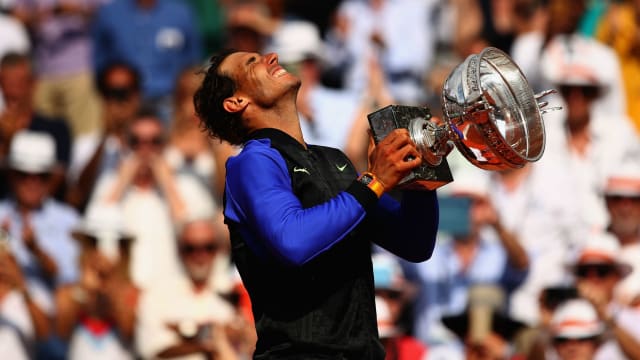 There was probably one factor among the reasons why Roger Federer opted to skip the French Open for a second year running that swayed his decision more than any other: Rafael Nadal.

That an accomplished player on the red dirt like Federer has just one title at Roland Garros to his name would be a surprise in any other era that did not feature Nadal.

Never in the history of tennis has one player been so dominant at a single grand slam or on a single surface, he has 10 French Open crowns to his name to prove that point.

Indeed, Nadal returns to Paris as defending champion and in supreme form having won in Monte Carlo, Barcelona and Rome in the build-up. That the 'King of Clay' can be beaten in the French capital is almost unthinkable - especially with a favourable draw that sees his main contenders in the opposite half.

But the key word there is almost. Here we look at four players who could do the impossible and dethrone the king...

Nadal's form on the clay saw him rack up a 21-match winning streak dating back to last year's Internazionali d'Italia, taking a record 50 consecutive sets in the process. But Zverev has enjoyed plenty of success on the red dirt in 2018. The German chalked up 13 consecutive victories, resulting in titles in Munich and Madrid, and only a sublime comeback by Nadal in the Rome final saw his streak come to an end. Zverev's record in grand slams is poor, he has gone beyond round three just once, but few look better placed to challenge than the world number three.

Of the nine career ATP titles Thiem has won, seven have come on clay. The Austrian has also enjoyed runs to the semi-final finals at Roland Garros in the past two years - losing to Novak Djokovic and Nadal, the eventual champions, respectively. Moreover, Thiem was the man to end Nadal's sensational run with a quarter-final victory in Madrid, having been last player to beat the Spaniard on clay in Rome a year previous.

Find someone to hug you like @RafaelNadal hugs the Coupe des Mousquetaires. #RG17pic.twitter.com/a4MWBoma4K

World number 21 Nishikori represents somewhat of a wildcard, an inconsistent talent still finding his rhythm after injuries disrupted the end of his 2017 season. Nishikori can certainly play on the clay, as proven by a run to the final in Monte Carlo, which included a last-four win over Zverev before being beaten by Nadal. He is twice a quarter-finalist at the French Open, but a lack of genuine contenders may see him go further this year and an appearance at the 2014 US Open final showed his grand slam pedigree.

When Djokovic won a first French Open title in 2016 to complete a career Grand Slam, the tennis world was at his feet and many were tipping him to win all four major honours in a calendar year. But since then, the former world number one has been beset by injury woes and inconsistent form, with his triumph at Roland Garros the last of his 12 slam wins. However, in Rome there were signs of Djokovic returning to his best, a run to the semis - including a win over Nishikori - ended by a spirited showing against Nadal. Moreover, Djokovic knows how to beat Nadal. Their head-to-head is edged narrowly 26-25 by the Serbian, who beat Nadal in the last eight in Paris in 2015.