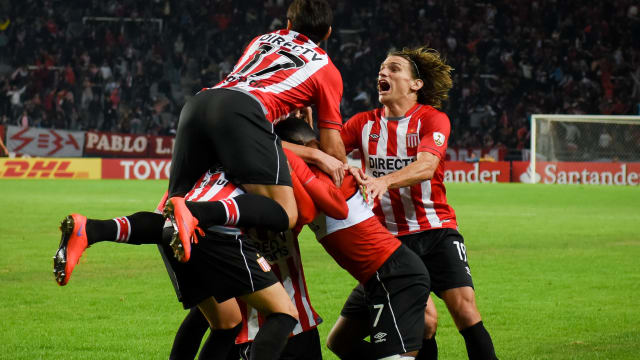 Estudiantes reached the Copa Libertadores last 16 with a dramatic win over Nacional, while Independiente also moved into the knockout stage.

Nacional - only needing a draw to progress from Group 6 - took an early lead through Matias Zunino, who scrambled in from a corner.

But the final half-hour belonged to Estudiantes, who dramatically struck three times to advance.

Otero equalised from the penalty spot after a handball in the area before Lucas Melano finished clinically to make it 2-1.

Nacional had Gonzalo Bergessio sent off in the 75th minute, while the hosts were also reduced to 10 men when Rodrigo Brana saw red.

Needing another goal to advance on goal difference, Estudiantes were awarded a controversial late penalty.

Otero again stepped up, converting the 90th-minute spot-kick to seal an incredible comeback win before the visitors finished with nine men when Christian Oliva saw red.

Santos finished top of the group and drew 0-0 at home to Real Garcilaso in their final outing.

Independiente progressed after a 2-0 victory over Deportivo Lara, while Group 7 winners Corinthians lost 1-0 to Millonarios.

Atletico Nacional and Colo-Colo moved through from Group 2 after their 0-0 draw.

Delfin needed a win at Bolivar to move into second, but they were beaten 2-1 as Juanmi Callejon scored a brace.