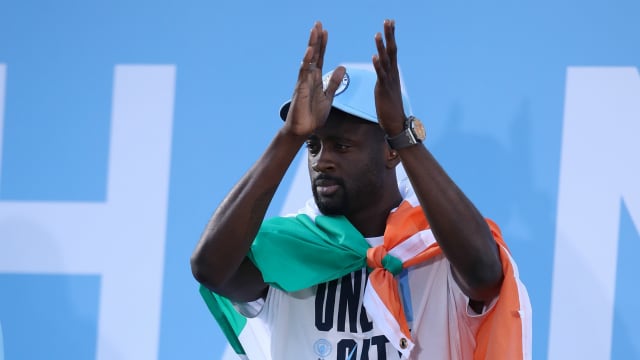 Yaya Toure says he wants to play with Paul Pogba and would consider joining Manchester United after ending an eight-year spell at rivals Manchester City.

Toure is a free agent after wrapping up his third Premier League title at City, leaving the club at the age of 35.

The midfielder has stated his preference is to stay in the Premier League and suggested United is a possible move due to the retirement of Michael Carrick.

"It's going to be hard one day to play against City, but I have to do that. It is part of my job. I've been playing football for such a long time, I'm no good in the office or something else. I am good in football.

"To see myself at a different club is going to be difficult. I have been such a big part of City for such a long time now. I just want to say that definitely I will continue to play at a high level - Champions League or Europa League.

"I want to play two more years. They have to be in the higher level and then I can do something else."

A final message to the City fans...

Pogba's United future has been questioned as the France international appears to have an uneasy relationship with Jose Mourinho, who benched the midfielder for both legs of his side's Champions League exit to Sevilla, while he has regularly faced criticism in the media.

"I love Paul Pogba," Toure said. "I love Kevin [De Bruyne] as well and I love [David] Silva. Silva was my player. It is difficult because you have to be good on all things. Silva is short and strong.

"Pogba - it's difficult because of the way the media has treated him. We don't have the same characteristics because for me I was involved in all the ball, I ran everywhere. I liked that. I was prepared for that. I was working for that for a long time.

"When I was in the academy in Africa I had to run everywhere, get box to box in 50 seconds. It's something I've been loving to do.

"Pogba is the same size, power - but different in the way he wants to go. Technically as well, the ability to score goals as well. It is a player I want to play with, to be honest, just to teach him some things.

"Pogba is a great player. He's a fantastic player. He's a little bit young at the moment. Criticism is a part of life. If they criticise you it's because they want you to be good or be better."

The crucial League game at Newcastle in 2012 - two goals Yaya

The crucial League game at Crystal Palace in 2014 - Yaya

Toure, however, accepts a move to United, having been such a large part of City's rise to the top in recent years, would be hugely controversial.