Napoli 2 Crotone 1: Milik and Callejon condemn visitors to the drop 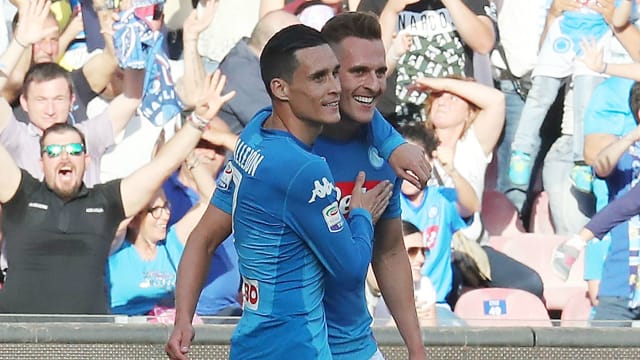 Arkadiusz Milik scored his second goal in as many games as Napoli ended their season with a 2-1 home win over Crotone that condemned the Calabrian side to Serie A relegation.

The 24-year-old striker took his total for the 2017-18 league season to five goals in 16 appearances and he will head to the World Cup with Poland in confident mood after a strong end to the campaign for the Serie A runners-up.

Jose Callejon scored the second of Napoli's goals, both of which were made possible by Lorenzo Insigne's superior vision and accurate crossing, with Marco Tumminello's late strike for the visitors their last in Serie A for the next year at least.

Milik propelled Napoli into the lead after 22 minutes, heading the ball back across goalkeeper Alex Cordaz and into the bottom corner of the net from close range after Insigne showed his quality with a run, turn and cross that opened up the Crotone defence.

Insigne's unselfish play created Napoli's second nine minutes later, the 26-year-old curling a cross from the left corner of the penalty area to the far post, where Callejon met it with a first-time shot on the half volley, side-footing the ball high into the net.

GOAL!!!
@J21Calleti sticks it away after Insigne's cross from the left

Maurizio Sarri - whose future at Napoli remains in doubt - sent on Dries Mertens and club captain Marek Hamsik to see out the victory and, although Tumminello powered home in the 90th minute for third-from-bottom Crotone, the visitors ultimately knew from the outset victory at Stadio San Paolo to save themselves from the drop was a tall task.