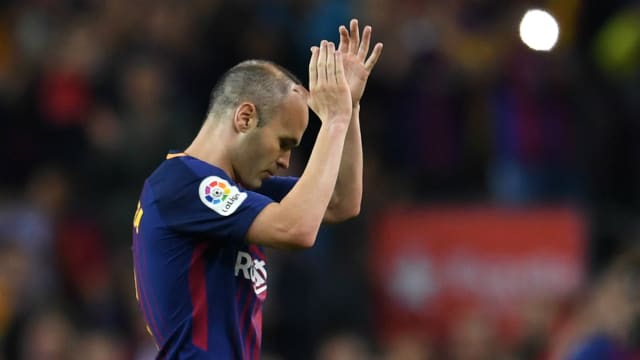 Ernesto Valverde admits there is no single player who can replace Andres Iniesta in the Barcelona first team.

The 34-year-old will play his final match for the club on Sunday, when the LaLiga champions conclude their campaign against Real Sociedad at Camp Nou.

The Barca captain has won 32 major club trophies during his illustrious senior career, including the domestic double in 2017-18, and Valverde concedes it will require a certain reorganisation of the team to compensate for his absence.

"Hopefully, we'll send Andres off with a victory," he told a news conference. "I don't think we'll get anybody with the same characteristics as Andres. We have to be realistic and stay faithful to our style.

"There are similar players to him, like Denis Suarez, [Carles] Alena, or like [Philippe] Coutinho, who maybe attacks a little more. But we have to find a solution to keep the team playing smoothly and we know that we'll need to find other solutions to replace him.

"It's been an honour to coach him this season and to enjoy him as a player."

With Iniesta departing and Xavi having left three years ago, speculation has mounted about the future of Sergio Busquets, the third member of a midfield trio that helped Barca and Spain dominate football's landscape.

Valverde, though, sees no reason to fear the 29-year-old's departure, given he has a contract until 2021.

"Everyone knows how important Sergio Busquets is and the balance he gives us," he said. "I hope Sergio continues with us. He's under contract and he's a very important player for the team."

Barca played a friendly against Mamelodi Sundowns in South Africa in midweek, in which Lionel Messi made a brief appearance, despite being rested for the dramatic 5-4 defeat to Levante last weekend.

Valverde plans to leave the star out of Sunday's match, too, meaning he will not now play until at least May 29, when Argentina take on Haiti in a World Cup warm-up.

"He's played a lot of minutes this season and that includes playing with injuries. Now is the moment for him to rest a little," Valverde explained.

"He played for 15 minutes in South Africa for contractual reasons. The idea is that he rests."