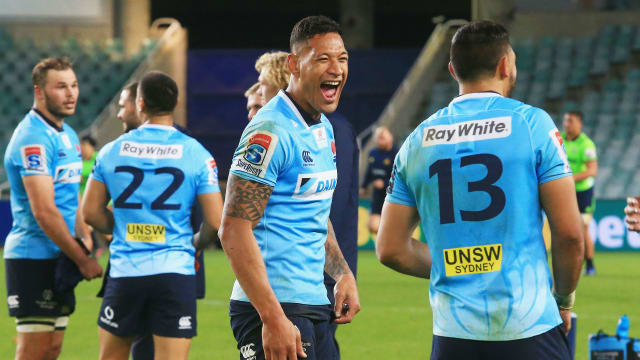 Tevita Nabura was sent off for a wild kick as the Waratahs ended a 40-match losing streak for Australian sides over New Zealand franchises with a 41-12 thumping of the Highlanders, while the Crusaders and the Sunwolves also claimed Super Rugby wins on Saturday.

Not since May 2016 had an Australian side got the better of a trans-Tasman rival, but the Waratahs ended that hoodoo with a six-try drubbing at Allianz Stadium.

The hosts were eight points to the good following a Taqele Naiyaravoro score when Nabura was given his marching orders for a kung-fu style kick to the face of Cam Clarke as the wing caught a high ball.

Aaron Smith was sent to the sin-bin for a deliberate knock-down two minutes later and Naiyaravoro evaded an attempted tackle from Waisake Naholo to dot down for a second time with the Highlanders down to 13 men, Bernard Foley converting to make it 15-0 at the break.

Israel Folau stole the show in the second half in Sydney, claiming a double of his own to reach the 50-try mark in his 83rd Super Rugby match - only Joe Roff and Christian Cullen achieved that tally in fewer games.

Lalakai Foketi and Curtis Rona also went over for the rampant Waratahs, scores from Elliot Dixon and Ash Dixon providing little consolation for the 2015 champions.

Owen Franks was cited for striking James Parsons in a hard-fought 32-24 win for the Crusaders over the Blues.

The defending champions have now won eight in a row to top the standings, but the struggling Blues put up a fight, Rieko Ioane bagging a brace in an entertaining contest.

They were unable to halt the Crusaders juggernaut, though, George Bridge, Quinten Strange, Matt Todd and Bryn Hall scoring in a clinical display, with Franks set to learn his fate on Sunday.

The Sunwolves followed up their rout of the Reds with a 26-23 triumph over the Stormers, Hayden Parker scoring the decisive drop-goal almost four minutes after the siren sounded in Hong Kong.