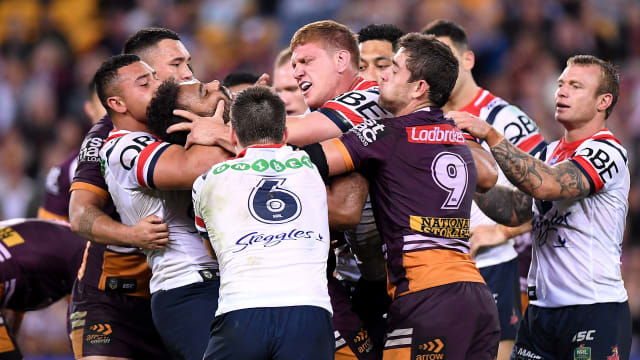 With the scores level entering the final five minutes at Suncorp Stadium, Napa was placed on report and shown a yellow card for leading with the head in an ugly challenge on Korbin Sims.

And Broncos duly punished the visitors, Jamayne Isaako spotting a gap in the opposition defence to dart through and score the winning try, which he converted himself to round off the win.

A pulsating contest saw the Roosters leading 12-10 at the break with an unconverted Corey Oates try and Kotoni Staggs' debut score cancelled out by a Luke Keary brace for the visitors.

Isaako's first try early in the second half had the Broncos back in front, but quickfire efforts from Isaac Liu and Boyd Cordner had the Roosters up by six.

An epic battle in the end, we pull through against the Sydney Roosters 28-22 #NRLBroncosRoosterspic.twitter.com/GvxTDBsDM9

But James Roberts showed the away defence a clean pair of heels to help level the scores, before Napa's indiscretion - which caused a brief melee - paved the way for Isaako to seal a win that leaves the Broncos as one of six teams on 12 points - including the Roosters.

David Fusitu'a and Peta Hiku tries had the Warriors 12-2 in front by the break and, although Clinton Gutherson and Manu Ma'u efforts had the Eels briefly in front, Jazz Tevaga and Issac Luke scores sealed the win for the Warriors.

To make matters worse for the Eels, veteran back-rower Beau Scott limped off in the 61st minute with a possible torn anterior cruciate ligament injury that may mean the 34-year-old has played his last game for the club.