Nadal back to dominant best as Dimitrov, Thiem fall in Rome 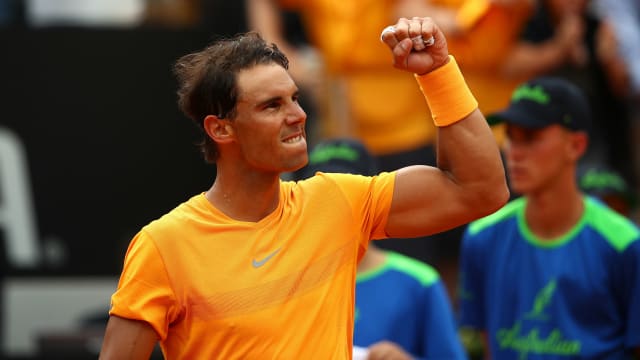 Rafael Nadal bounced back from a rare clay-court defeat in style with a merciless thrashing of Damir Dzumhur at the Internazionali d'Italia, where Grigor Dimitrov was dumped out on his 27th birthday.

Nadal's astounding 50-set winning streak on clay came to an end last week when he lost to Dominic Thiem in the quarter-finals of the Madrid Open, but the two men suffered contrasting fortunes in Rome on Wednesday.

Seven-time champion Nadal - seeking to reclaim the number-one ranking he conceded last week - hammered Dzumhur 6-1 6-0 after Thiem had gone down in three sets to Fabio Fognini, the Austrian smashing a racquet in anger during an intense contest.

Four of the top eight seeds were eliminated on a busy day of action. Thiem was joined in making an early exit by Dimitrov and John Isner, who lost respective close matches to Kei Nishikori and Albert Ramos-Vinolas, while Kevin Anderson retired after losing the first set to Aljaz Bedene.

Next up for Ramos-Vinolas is a meeting with Novak Djokovic, who eased past Nikoloz Basilashvili 6-4 6-2. Djokovic has not dropped a set in five previous meetings between the pair.

Defending champion Alexander Zverev continued his excellent form with a 7-5 6-2 win over Matteo Berrettini, his 10th victory in a row.

He refuses to be broken!

That's 9 consecutive matches on clay without surrendering a service break for Alexander Zverev after his 7-5 6-2 victory over Matteo Berrettini. #ibi18pic.twitter.com/m7Pqo25mdF

'KING OF CLAY' BACK IN BUSINESS

"It was important, after a loss in Madrid, to come back strong, and that's what I did today," said Nadal following his demolition of Dzumhur.

"I went on court with the right intensity. I don't know how many mistakes I made, but not many. I also had control, more or less, of a high percentage of the points. That was the way that I want to play."

Nadal will face Denis Shapovalov in the last 16 after the Canadian got the better of Robin Haase.

The King of Clay needs just an hour to conduct his latest masterclass.