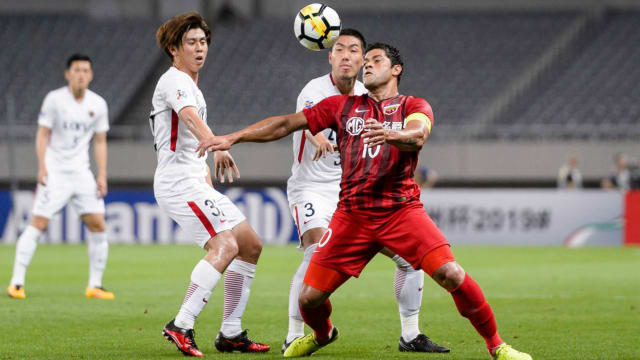 Hulk struck twice for Shanghai SIPG but it proved in vain as Kashima Antlers advanced to the AFC Champions League quarter-finals with a 4-3 aggregate victory.

Protecting a 3-1 advantage from last week's home match, Kashima did enough to reach the last eight for the first time in a decade despite a 2-1 loss in Wednesday's return leg.

The Japanese side made a shaky start as Gen Shoji's error allowed Hulk to net the opener in just the seventh minute, although their nerves were eased by a precious Shoma Doi equaliser three minutes from half-time.

Shanghai were back within a goal when Hulk converted his second from the spot in the 81st minute - Shoji having been penalised for a handball - but the comeback came too late for Vitor Pereira's men as their wait for continental success continues.

FULL-TIME | Shanghai SIPG (CHN) 2-1 Kashima Antlers (JPN)@atlrs_official progress to the quarters on a 4-3 aggregate! 2 goals by Hulk was not enough to turn the tide for Shanghai!#ACL2018#SHSvKSMpic.twitter.com/Gqfduj5e2j

Kashima are joined in the next round by Suwon Bluewings, who overturned a single-goal first-leg deficit against Ulsan Hyundai to advance 3-1 on aggregate.

Kim Gun-hee was the hero with two goals in the space of five first-half minutes, quickly following up his 26th-minute header by skilfully controlling and firing home Waguininho's knock-down.

Mislav Orsic had a golden chance to put Ulsan back in the driving seat when Kwak Kwang-seon shoved Richard Windbichler to the floor, but the Croatian striker's low penalty was pushed away by Shin Hwa-yong.

It was the last chance offered by Suwon as Waguininho grabbed one of his own in stoppage time, putting the seal on the two-time champions' impressive 3-0 win.

FULL-TIME | Suwon Samsung Bluewings (KOR) 3-0 Ulsan Hyundai FC (KOR) @bluewingsfc are through to the #ACL2018 QFs after a 3-1 win on aggregate against @ulsanFC at home! #ACL2018#SSBvUSHpic.twitter.com/yvkgPH97gp