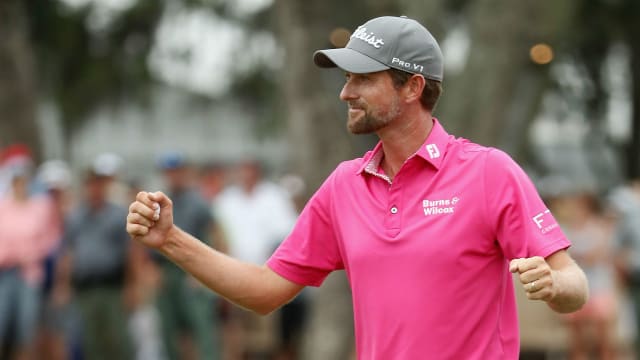 An "exhausted" Webb Simpson vowed to learn from a tough final round after ending his barren spell at the Players Championship on Sunday.

The 2012 U.S. Open champion started his final round with a commanding seven-shot advantage, but it was not all plain sailing for the runaway leader at TPC Sawgrass.

Simpson suffered the jitters in Florida, but was able to seal his first victory for five years by a four-stroke margin following a one-over closing 73 to finish 18 under.

The 32-year-old, who had to change his putting stroke following a ban on anchor putters, spoke of his relief after finally adding to his list of honours in his homeland.

"It feels great. I am exhausted. It was a long day and it is actually probably harder work to be ahead by five or six than near the lead." said Simpson.

"I battled through, didn't have my best stuff but it was good enough. I'll learn from it.

"It was tough. I tried to just stay busy in the morning, reinforce that it was just one shot at a time - you have a tendency to want to fast forward and get it done. I had to pace myself and just stay in it."

Simpson expressed his gratitude for the support he has received during a run of 107 starts without a victory.

"It means everything to me. I'm the face that's playing, but there's so much that goes behind what I do," Simpson added.

"There's so many people that are part of the puzzle. 107 starts, I think had it not been for my faith it would have been a lot harder. It was still hard, but I'm just really thankful to get it done.

"I've never really played well [on Sunday], but I enjoyed the golf course. I'm comfortable on the golf course. Sometimes it's just a mystery; some weeks, something happens, and I had a good solid first round and then second round was pretty special.

"This weekend I hung in there to get it done. All in all, an incredible week."