Mohamed Salah created Premier League history as Liverpool wrapped up a top-four finish with a comfortable 4-0 win over Brighton and Hove Albion on Sunday.

Salah fired the hosts in front during the first half at Anfield, the forward swivelling inside the penalty area to score his 32nd league goal and, in the process, set a new competition record for a 38-game season. 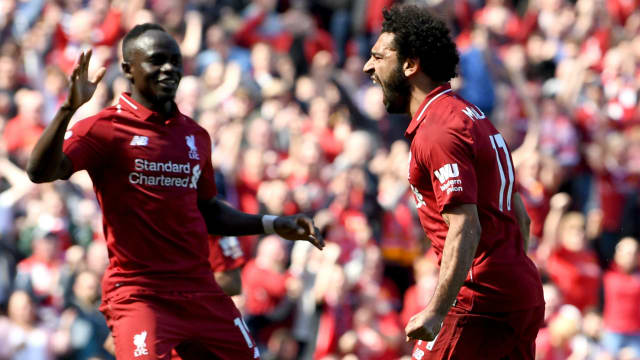 Salah then showed his creative side by setting up Dominic Solanke's first goal for the club, and Robertson netted a fourth in the 85th minute to help Jurgen Klopp's side finish their domestic duties in style.

The result saw travel-sick Brighton end an otherwise successful first Premier League campaign without an away league win in 2018, as Chris Hughton's team wilted in the Merseyside sunshine.

Liverpool still have unfinished business in Europe this season, of course, and Klopp made sure Salah - as well as Sadio Mane and Roberto Firmino, the other members of the now-famous front three - were unscathed before the final against Real Madrid on May 26, withdrawing them all in the closing stages of what was a routine victory.

For the second successive season, Liverpool's hopes of finishing fourth or higher were boosted by a final-weekend fixture against opponents with nothing to play for.

However, unlike a year ago against relegated Middlesbrough, there were no last-day nerves at Anfield this time. Instead, Klopp's side dominated from start to finish, with only their profligacy in front of goal preventing them from winning by a greater margin.

They eventually moved ahead in the 26th minute, though only after referee Kevin Friend had turned down two strong penalty appeals in front of a baying Kop.

Salah, who had been at the centre of the second claim after being floored by a lunging tackle from Shane Duffy inside the area, ended a three-game run without a goal courtesy of a low, left-footed finish.

A new record for #PL goals in a 38-match season pic.twitter.com/VeMk03Lumg

Lovren's header put the game beyond a beleaguered Brighton, who were fortunate to only trail by two at the half-time interval.

Mane fired straight at Mathew Ryan when clean through, while his attempt to tee up Salah saw him underhit the square pass, though the Egyptian did eventually get away a shot that was blocked on the line by the retreating Duffy.

Firmino was also guilty of blazing over, meaning it was left to Solanke to show his more esteemed team-mates how to finish early in the second half.

The England international rattled in a rising drive off the underside of the bar to break his duck, Salah providing the final pass to set up the shooting opportunity.

The Premier League's Golden Boot winner was withdrawn just prior to Liverpool scoring again, Robertson capping his own impressive debut campaign at the club by rattling in the fourth in the 85th minute.
Tags
Read Full Story