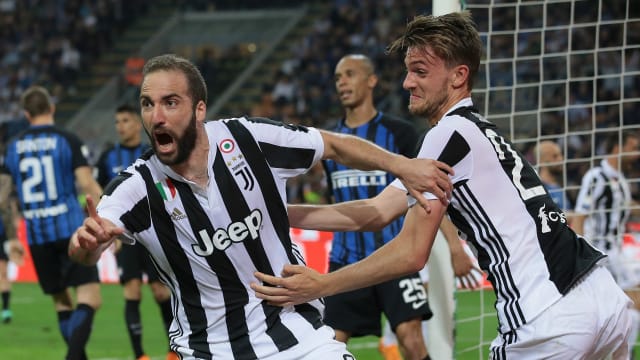 A few months ago, Italian football appeared to be in a desperate position.

The national team had missed out on World Cup qualification for the first time in 60 years and, although Napoli had started the Serie A season well, most expected Juventus to serenely progress to another Scudetto.

Now, in May, the situation looks an awful lot brighter, even if Juve did emerge victorious once again.

Despite Napoli's late slip-ups they are one of world football's most thrilling sides, Italy has the most exciting league among Europe's elite, Roma humiliated Barcelona in the Champions League - the list goes on.

Things are even looking up for the Azzurri, with Roberto Mancini set to take charge following his departure from Zenit St Petersburg.

Here, we look at four factors that have helped ensure Serie A is back in the big time.

Tight title races have been hard to find in Europe this season. Bayern Munich cruised to the Bundesliga again, Paris Saint-Germain dominated Ligue 1 to reclaim the title from decimated Monaco and Pep Guardiola's Manchester City brushed all aside in the Premier League.

But in Italy, two titans have gone head-to-head throughout the campaign, Napoli winning 1-0 in Turin last month to set up a thrilling run-in, although when goalscorer Kalidou Koulibaly was sent off early in their next game against Fiorentina their title hopes were severely dashed.

That Napoli have pushed so hard has perhaps increased appreciation of Juventus, who have now won a seventh consecutive Scudetto despite not being regarded as a particularly classic Bianconeri side due to their relative lack of European success.

Remember that Napoli were stripped of leading goalscorer Gonzalo Higuain by Juve and it is remarkable Maurizio Sarri - one of Europe's most colourful managers - has kept the season alive for so long.

Nobody expected Roma to beat Barcelona in the Champions League; when the draw was made the tie was described as a "sweetie" by one Spanish newspaper. And when Barca won 4-1 at home in the opening leg, any remaining hope of Giallorossi success was seemingly quashed.

But in the Italian capital, fans still believed. And the second leg provided one of the great nights in Champions League history, Kostas Manolas heading home to complete a comeback as remarkable as Barca's against Paris Saint-Germain, in its own unique way.

Roma were subsequently undone in the semi-finals by Liverpool - inspired by their former player Mohamed Salah - but they have shown a path to glory for fellow Italian sides.

AC Milan and Inter have probably both underperformed this season, but the future is bright for each of these famous old clubs due to takeovers resulting in large investment.

Milan were among Europe's busiest sides in the transfer market a year ago and although Gennaro Gattuso has had to turn around a nightmare start that led to Vincenzo Montella's sacking, there are positive signs the Rossoneri could soon compete for titles again.

With wily coach Luciano Spalletti in charge, Inter will also be hopeful they can get back to the elite sooner rather than later. Seeing the Milan clubs jostling for Scudetto glory seems inevitable in the very near future.

A lack of true global stars is hard to avoid in Serie A, with the likes of Paul Pogba having stopped off briefly before heading to brighter lights elsewhere. But in Lazio's Sergej Milinkovic-Savic, Serie A might just have the next big thing.

Many regard Milinkovic-Savic as an even more thrilling prospect than Pogba and he is poised to light up the World Cup with Serbia. He is far from the only potential future great plying his trade in Italy, though.

9 - Sergej Milinkovic-Savic is the youngest midfielder to have score at least nine goals in the top five European Leagues this season. Wonder.

Teenage goalkeeper Gianluigi Donnarumma is not the finished product but the Milan stopper looks a genuine heir to his legendary namesake Buffon, while Giovanni Simeone could have an even better playing career than his dad, Atletico Madrid coach Diego.

If Serie A can hold on to its talent, with the likes of Jorginho and Lorenzo Insigne ready to step up in Italy's new era, then the league will certainly be worth paying close attention to for years to come.