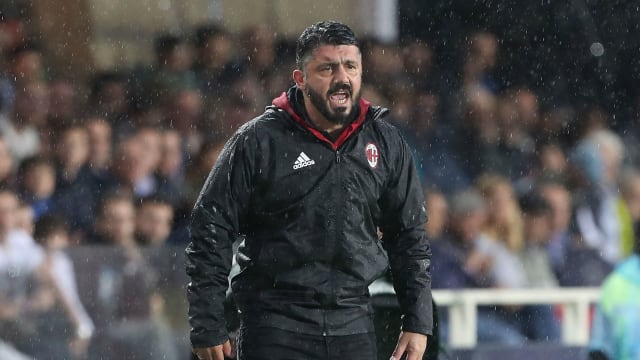 Gennaro Gattuso praised the character of his AC Milan side after they secured a place in the Europa League with a 1-1 draw at Atalanta.

Franck Kessie rifled in a brilliant 60th-minute opener against his parent club and, although Andrea Masiello levelled in stoppage time, Milan are guaranteed a top-seven finish after Fiorentina slipped up with a 1-0 defeat at home to Cagliari.

Atalanta can still pip the Rossoneri to sixth and an automatic route to the Europa League group stages.

Gattuso was installed as Vincenzo Montella's replacement last November as an expensively assembled squad failed to live up to expectations.

The former crowd favourite has put his stamp on the side impressively, helming 11 wins from 23 Serie A outings, with only four defeats.

"We have secured the Europa League. Now, if we manage to seal sixth place all the better," he told Milan TV.

"After such a troubled season, this achievement seemed easy for many people but it wasn't.

"Tonight we showed bravery and sense of belonging."

Wednesday's 4-0 Coppa Italia loss to Juventus marked a crushing setback and captain Leonardo Bonucci was pleased to see a spirited response in Bergamo.

"This is a very important point," said the Italy centre-back. "We bounced back after Wednesday's final and performed as a team, proving that we are brave men.

"If we keep this intensity, we can become a tough team. This has been a long season, very demanding on a physical and psychological level.

"Now, another important match awaits us at our home [against Fiorentina] with our fans by our side."