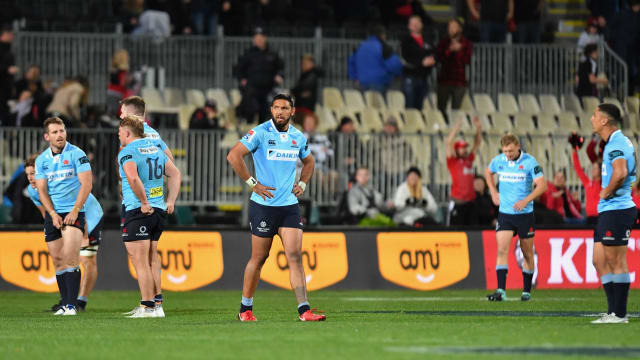 The Crusaders produced the biggest comeback in Super Rugby history to beat the Waratahs 31-29 and Hayden Parker starred as the Sunwolves claimed their first win of the season with a drubbing of the Reds on Saturday.

Defending champions the Crusaders looked set to be denied a seventh consecutive win when Daryl Gibson's men opened up a 29-0 lead with just less than half an hour played at AMI Stadium.

Tries from Cam Clark, Taqele Naiyaravoro, Israel Folau and Curtis Rona, along with nine points from the boot of Bernard Foley, had left the holders shell-shocked.

But there was still plenty of time for Scott Robertson's side to pull off a fightback and they turned the tide in style to claim a historic victory.

Joe Moody, Codie Taylor and Seta Tamanivalu went over to reduce the Waratahs' lead to 29-19 at the break and the Crusaders completed a stunning turnaround in the second half.

Braydon Ennor went over in the left corner with the Waratahs under immense pressure and referee Ben O'Keeffe awarded a penalty try with 12 minutes to play following a string of scrum infringements from the visitors.

Foley then missed a penalty from 40 metres out with five minutes to play and the Crusaders held on to replace the Hurricanes at the top of the overall standings.

What a finish! That was a very close match and a tough contest from the @NSWWaratahs. We are back at home in two weeks for Friday night footy v @Hurricanesrugby - see you all then. Your support tonight was awesome! #CRUvWAR#wewill#crusadeon  pic.twitter.com/nZ33gQI99Y

Parker claimed a Sunwolves-record 36 points and Hosea Saumaki scored a second-half hat-trick in a 63-28 demolition of the Reds.

The Sunwolves scored six tries in their biggest-ever victory, Parker among the try-scorers and also slotting over seven penalties and five conversions to give the Japanese side a first win of the campaign.

Lima Sopoaga scored 19 points as the Highlanders responded their defeat of the Sharks by claiming an 11th straight home win, defeating the Lions 39-27 at Forsyth Barr Stadium.

The Rebels produced a rousing fightback to beat the Brumbies 27-24, Reece Hodge settling it with a last-gasp penalty and Tom English scoring a first-half double as the Melbourne side rallied from 24-10 down going into the final quarter.