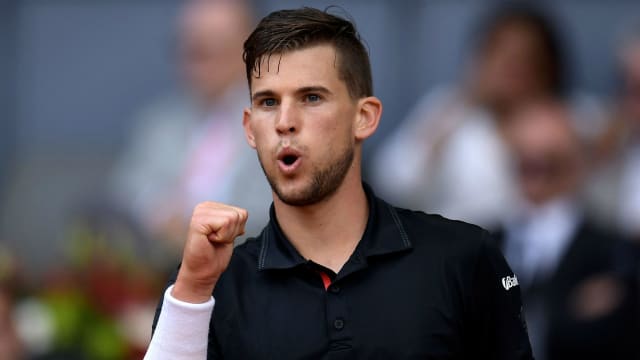 Rafael Nadal lost to a familiar foe on Friday as Dominic Thiem dished out the Spaniard's first defeat on clay since the same man overcame him in Rome last year.

Thiem knocked Nadal out in straight sets to reach the last four at the Madrid Open, where Kevin Anderson now awaits.

Nadal, who saw his streak of winning 50 successive sets come to an abrupt halt, will now lose top ranking.

In the second semi-final, Denis Shapovalov will take on Alexander Zverev.

The streak is over! @ThiemDomi shocks Rafael Nadal, ending the World No. 1's 21-match winning streak on clay, advancing to the semi-finals @MutuaMadridOpen.

If Thiem could string together performances like this with the same kind of consistency that Nadal has shown over many years, it might be the Austrian primed to move into the world number one spot.

As it is, that honour will fall again to Roger Federer after Thiem's 7-5 6-3 success ended Nadal's run on home soil, denying him a shot at a sixth win at this tournament.

Nadal had not dropped a set on clay since his reverse against Thiem at the Internazionali d'Italia last May.

But that incredible run was ended as the 31-year-old surrendered the opener and Thiem delivered a nerveless second-set showing to triumph in style.

Anderson is just a couple of weeks older than Nadal but will get his first taste of an ATP Masters 1000 semi-final after edging out qualifier Dusan Lajovic 7-6 (7-3) 3-6 6-3.

The sixth seed fired down 15 aces and is now eyeing a spot in the final.

"I really wanted to break through and be in the semi-finals," he said.

"It was a goal that I set myself. It doesn't mean that I'm done. It definitely feels good. It was a mini goal accomplished for me."

SHAPOVALOV FEELING AT HOME ON CLAY

Having started the tournament without an ATP World Tour victory on clay, Shapovalov is now down the last four to win the whole thing.

Shapovalov, who reached the semis at the 2017 Rogers Cup, is hopeful his run will continue.

It's been a special week for @denis_shapo
Read More https://t.co/AaAPzRVvOgpic.twitter.com/NK0eNfy8LM

"I'm happy again to be in the semi-finals," he said. "I never knew when my next time being in a semis would be. I'm more than thrilled to be there.

"Hopefully I can go even further."

He will now meet second seed Zverev - the man who knocked him out at the Rogers Cup - who beat John Isner 6-4 7-5.