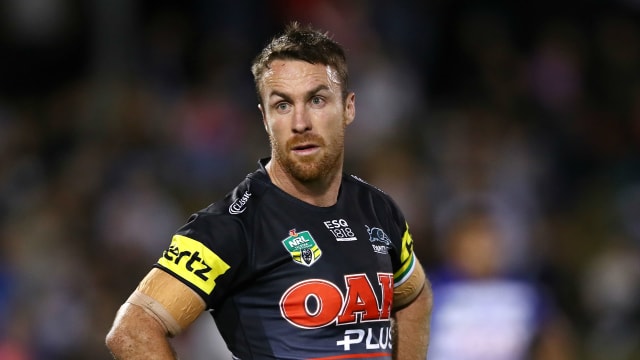 Penrith Panthers climbed up to second place in the NRL ladder with a hard-fought 29-18 victory over Newcastle Knights at McDonald Jones Stadium.

After two defeats in their previous three matches, the Panthers were back on song on Friday as a first-half blitz set up their seventh win of the campaign.

Converted tries from Reagan Campbell-Gillard, Tyrone Peachey and Dallin Watene-Zelezniak gave the Panthers a 18-6 lead at the break, with James Maloney deadly from the tee.

Maloney added a drop goal and a penalty to his tally after the Knights had threatened a fightback following Kalyn Ponga's try.

In the battle of the bottom two there was predictably little between Canterbury Bulldogs and Parramatta Eels, but a mistake from Clinton Gutherson gifted the former a 20-12 victory.

After racing into an 8-0 lead the Bulldogs found themselves 12-10 behind at half-time, as Gutherson and Bevan French touched down for the Eels.

Moses Mbaye kicked Canterbury level with 25 minutes to play before the Bulldogs snatched victory late on, with a huge slice of fortune.

A kick through from Josh Jackson should have been booted away by Gutherson, but he missed the ball to allow Adam Elliott to pounce and set up an important victory.

Defeat leaves Parramatta rooted to the foot of the table, while Canterbury keep their top-eight hopes alive.