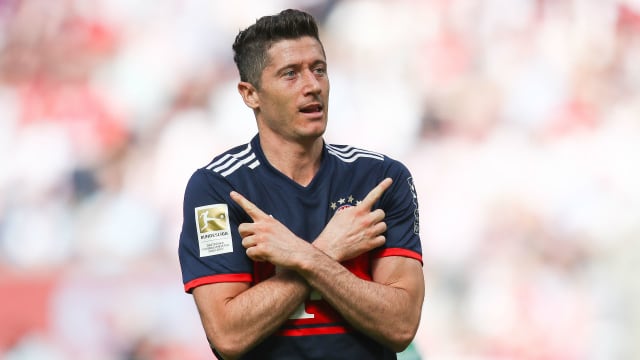 Robert Lewandowski showed himself to be an "egotist" when he disrespected Jupp Heynckes and Sandro Wagner after being substituted in Bayern Munich's 3-1 win at Cologne, according to former coach Ottmar Hitzfeld.

Lewandowski was withdrawn 13 minutes from time on Saturday and refused to shake the hand of Heynckes, incurring the wrath of the boss, who later confirmed he had a stern word with the striker.

The incident further intensified reports of Lewandowski's rumoured desire to leave the club, with Real Madrid said to be interested.

And Hitzfeld, who had two spells in charge of Bayern, called Lewandowski out, saying his actions suggest he is not a team player.

"I was scared myself [about disrespecting Heynckes] when I saw the TV pictures," Hitzfeld told Sport1. "This is of course a no-go.

"How he behaved towards a respectable person like Jupp Heynckes is impossible. When a coach substitutes a player, it is the most normal thing in the world.

"Then the player has to go out [of the match], then you clap the new player coming in and wish him good luck.

Despite Lewandowski's recent behaviour and the transfer rumours, Hitzfeld does not anticipate the striker leaving, even if he is "very angry" with his antics.

"I cannot imagine Bayern Munich going back [on what they have said about not selling Lewandowski]," Hitzfeld said.

"Bayern Munich has made a clear statement. Bayern does not need money, they do not have to take millions to sign up for a new player.

"Bayern Munich is very healthy and stable, an authority club in which everyone has respect for each other. That's [what] Bayern radiates.

"I believe that Lewandowski also has a new advisor who wants to offer the player everywhere, of course, who wants to push the price up a bit and maybe even raise his own salary.

"But it's ultimately about Lewandowski - and I'm very angry about this episode. That's not Bayern Munich-like."