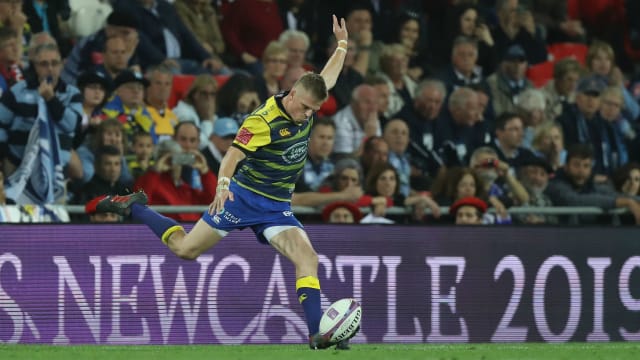 Gareth Anscombe kicked a penalty with a minute left on the clock to clinch a 31-30 victory for Cardiff Blues in the European Rugby Challenge Cup final against Gloucester in Bilbao.

The Welsh region trailed 20-6 at half-time but came out fighting in the second 40 minutes and, after missing a conversion that would have pulled them level four minutes from time, Anscombe made no mistake with his next pressure kick to seal a famous win.

Victory for the Blues saw them secure European honours for the first time since winning the Challenge Cup in 2010 - also the only previous silverware for a Welsh side.

The Blues were dealt an early blow when Wales flanker Josh Navidi was forced off with a shoulder injury, although they were first to get points on the board through a Jarrod Evans penalty.

Billy Burns' pin-point cross-field kick set up Henry Trinder for the first try and, with Billy Twelvetrees having added the extras, Callum Braley forced Blaine Scully into touch as he dived for the line at the other end.

Another Evans kick from the tee brought the Blues back to within a point, but Twelvetrees re-opened the gap before Lewis Ludlow was denied a try after Josh Hohneck was harshly deemed to have delivered a pass forwards in the build-up.

Great respect between both sides at the full time whistle and the celebrations begin for @Cardiff_Blues . #ChallengeCupRugby #Bilbao2018 pic.twitter.com/Rbdj8hKPy4

A late flurry of points before half-time - coming courtesy of a Mark Atkinson score and the boot of captain Twelvetrees - sent the Cherry and Whites in with a 14-point advantage at the break.

The Blues flew out of the blocks at the beginning of the second half, though, and were in front after 56 minutes, as tries from Tomos Williams and Garyn Smith - despite suspicions of offside against the latter - helped them into a 23-20 lead.

James Hanson crossed to put Gloucester back in front and the two-time champions were 30-23 to the good when Ludlow was sent to the sin bin after the Premiership outfit were penalised for offside.

Scully, having been denied earlier in the match, managed to stay inside the confines of the pitch on this occasion as he reached for the whitewash under pressure from Twelvetrees, but Anscombe could not level the scoreline from tight on the touchline.

But he was afforded another opportunity to make a decisive kick - this time for a match-winning three points from the opposite flank - and the Wales international sent the ball sailing between the posts to the delight of the Welsh contingent inside San Mames.