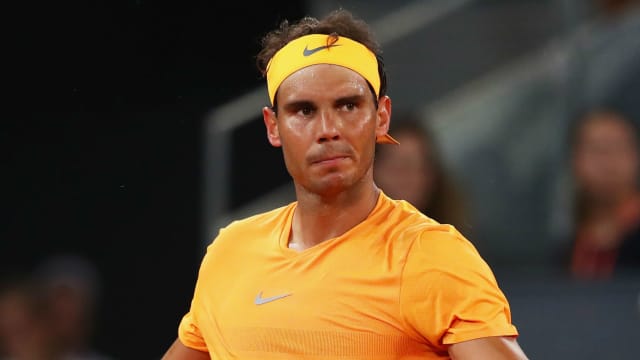 Rafael Nadal's record-breaking run of 50 successive sets won on the same surface was brought to an end at the Madrid Open by Dominic Thiem, the last man to defeat him on clay.

World number one Nadal surpassed John McEnroe's record of 49 - set on carpet in 1984 - by beating Diego Schwartzman on the red dirt of the Caja Magica on Thursday, but he lost the opening set of his quarter-final against the Austrian 7-5.

It was the first set the Spaniard surrendered on clay since suffering defeat to Thiem in the quarter-finals of the 2017 Internazionali d'Italia almost 12 months ago.

Nadal looked invincible on his favoured surface after that point, claiming his 10th French Open triumph and 11th titles in Monte Carlo and Barcelona during the remarkable run.

The 31-year-old dropped serve in the seventh game, but Thiem fired long on set point when leading 5-4 and did the same again to hand the Spaniard a break back.

However, Nadal followed up with an extremely sloppy service game and Thiem capitalised before holding his nerve in the final game of the set, which he clinched with an ace to end the King of Clay's stunning streak.

The last man to take a set from Nadal before today? This guy @ThiemDomi is the last man to win a set and a match against Nadal on clay, doing so on 19 May 2017 in the Rome quarter-finals...#MMOPENpic.twitter.com/50y8n0EZVa