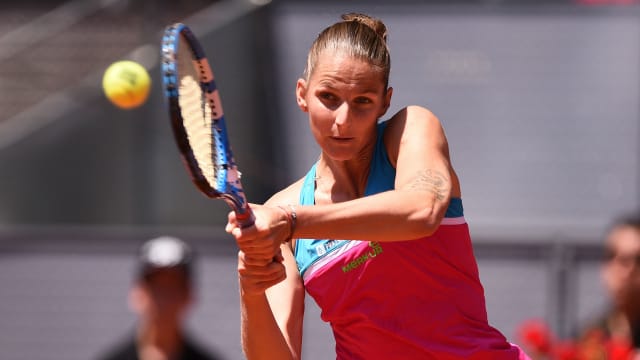 Karolina Pliskova spoke of her surprise after denying Simona Halep a third consecutive Madrid Open title before Kiki Bertens came from a set down to dump Maria Sharapova out in the quarter-finals.

Pliskova won her last tournament in Stuttgart and could go back-to-back in the Spanish capital after a 6-4 6-3 defeat of Halep.

World number one Halep had won 15 matches in a row at the Caja Magica, but her reign was ended by the in-form sixth seed.

An honest Pliskova said she was eager to avoid facing Halep after their last meeting in the last eight of the Australian Open, which the Romanian won to improve her record to six wins and one defeat against the world number six.

And the Czech did not expect to turn the tables on the top seed on Thursday.

"I never really thought I can beat her," Pliskova said. "This time somehow today I felt like I will have for sure chances - even the warm-up I felt so good.

"But in the game overall I think I didn't change much. I just was serving little bit different, more clever, not only the speed, but just to get the percentage, sometimes mix it up the speed, the kick which was quite working, just holding my serves."

The Dutchwoman ended Caroline Wozniacki's bid to regain top spot in the rankings in the third round and broke Sharapova three times in each of the second and third sets to reach the last four.

Bertens will face Caroline Garcia in the semi-finals after the seventh seed from France saw off Carla Suarez Navarro 6-2 6-3.

Petra Kvitova, eyeing back-to-back titles after winning in Prague, will come up against Pliskova in an all-Czech last-four contest following the two-time Wimbledon champion's 6-4 6-0 defeat of Daria Kasatkina.