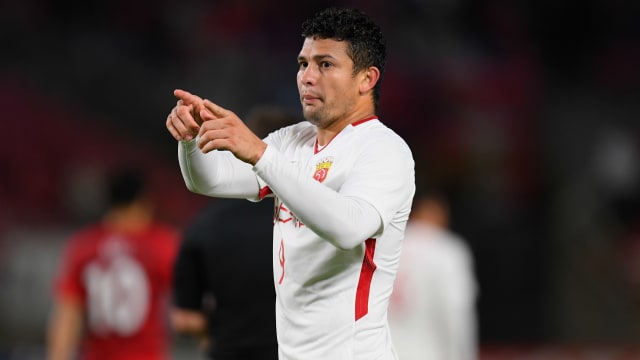 A second-half strike from Elkeson gave Shanghai SIPG a lifeline in their AFC Champions League tie with Kashima Antlers, as the Chinese Super League visitors slipped to a 3-1 defeat.

The Brazilian struck with 13 minutes remaining to give last year's semi-finalists an away goal to take back to China for the second leg of the last-16 tie next week.

Kashima, who were knocked out on away goals at this stage in 2017 by Guangzhou Evergrande Taobao, were dominant in the first half and took the lead two minutes before the break through Yuma Suzuki.

The home side doubled their lead four minutes after the restart, with Daigo Nishi prodding home after Shanghai failed to clear a corner, and they made it 3-0 against the run of play when Yu Hai headed into his own net.

.@atlrs_official will take a two-goal advantage into the return leg after scoring a 3-1 win over Shanghai SIPG in the first leg of their #ACL2018 Round of 16 tie!#KSMvSHS

However, the full-back made amends two minutes later, setting up Elkeson to sweep home and give Vitor Pereira's side at least some hope heading into the return fixture.

Earlier, Ulsan Hyundai opened up a narrow advantage in their last-16 tie with a 1-0 win over Suwon Bluewings.

Kim In-sung came off the bench to bury a clever finish midway through the second half and give the hosts a slender aggregate lead over their fellow South Koreans.