Rahane to captain India for historic Test with Afghanistan 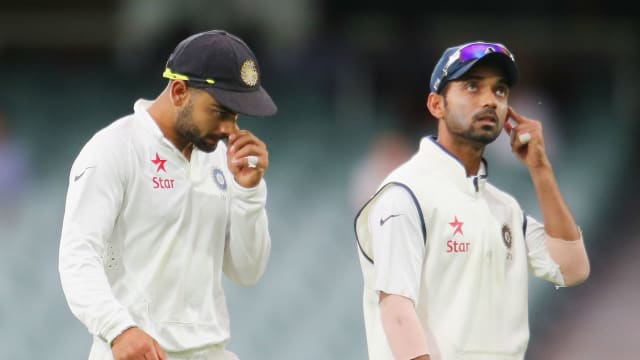 Ajinkya Rahane will lead India in Virat Kohli's absence for the one-off Test against Afghanistan in June.

Kohli will miss the game in Bengaluru after agreeing a month-long deal to join Surrey, with the batsman due to feature in six games for the English county.

However, Cheteshwar Pujara and Ishant Sharma - who are currently playing for Yorkshire and Sussex respectively in England - have been included in a 15-man squad.

Seam duo Jasprit Bumrah and Bhuvneshwar Kumar are notable absentees but Ravichandran Ashwin is one of three slow bowlers selected, along with Ravindra Jadeja and Kuldeep Yadav.

The game will see Afghanistan play in their inaugural Test after they - along with Ireland - were awarded Full Member status by the ICC last June.

While Kohli will not feature in the historic occasion at the M Chinnaswamy Stadium, he will return to international duty for the limited-overs leg of their tour to England.

Ambati Rayudu - a star performer for Chennai Super Kings in the Indian Premier League this season - has been picked for the three-match one-day series, along with seamer Siddharth Kaul, but there is surprisingly no place for Rahane.

India also announced their party for the Twenty20 fixtures against England and Ireland, with Washington Sundar chosen ahead of fellow spinner Axar Patel.

Dinesh Karthik will provide cover for veteran wicketkeeper-batsman MS Dhoni in both the 20 and 50-over formats.