Halep coasts in Madrid as Muguruza and Kvitova battle through 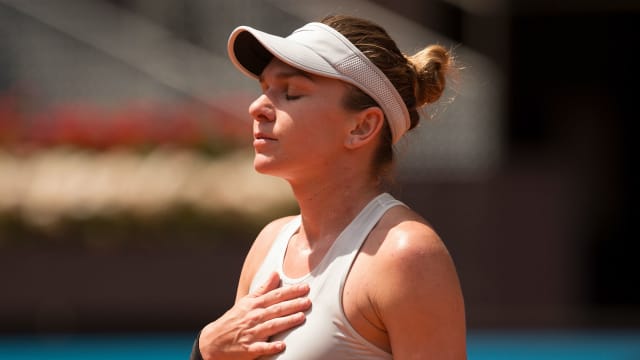 Halep faces a tough test from Caroline Wozniacki to hold onto top spot in the rankings this week, the Romanian needing to defend her title for a third successive year to keep the Dane at bay.

The Australian Open runner-up was in fine form as she brushed aside the previously in-form Elise Mertens 6-0 6-3, Halep rarely troubled by one of the WTA's rising stars.

Kvitova had more of a battle to put Olympic champion Monica Puig away - winning a second-set tie-break 10-8 - while Muguruza had to come from a set down to oust Donna Vekic 2-6 6-4 6-1.

Johanna Konta's clay troubles continued as she was beaten by Bernarda Pera, but Carla Suarez Navarro impressed as she sent fourth seed Elina Svitolina crashing out.

"THEY GIVE YOU WINGS"

Suarez Navarro hailed the importance of a home crowd as she turned things around against Svitolina, the Spaniard winning an epic battle 2-6 7-6 (7-3) 6-4.

"This victory at home, with your people here supporting, they give you wings, a lot of confidence," she told a media conference.

"Normally I'm not used to these kind of feelings. I only have them here. I feel that they are really supporting me."

.@CarlaSuarezNava was pushed to the brink, but never gave up! #MMOPEN18

Story of the Match: https://t.co/Dh3ZUXzkhJpic.twitter.com/3tMyYyrsnc

HALEP TAKING NOTHING FOR GRANTED

Halep may have only needed 71 minutes to dispatch Mertens, hitting 23 winners in the process, but she is taking nothing for granted as she looks to make history.

No female player has won three years in a row in Madrid, but she knows doing that will not be easy despite her impressive start.

"I have a great feeling," said Halep - who will face Kristyna Pliskova next. "But you never know in tennis. You have to take [it] day by day and match by match. At this level, everyone is playing really good tennis.

"I just have to be focused, to be motivated to win every match I play and to wait and see what happens. I don't want to expect anything, I just want to enjoy [it]."

Kvitova claimed her third win of the season in Prague last weekend and she has maintained her impressive form in Spain.

The Czech beat Puig 6-3 7-6 (10-8) early on Tuesday, a victory that moves her onto seven successive victories on the red dirt.

She will face Anett Kontaveit in round three to extend that run, with a potential quarter-final with Muguruza ahead should she get past Daria Kasatkina.

0:27 am getting ready for tomorrow's match pic.twitter.com/QBIW6OvpPz