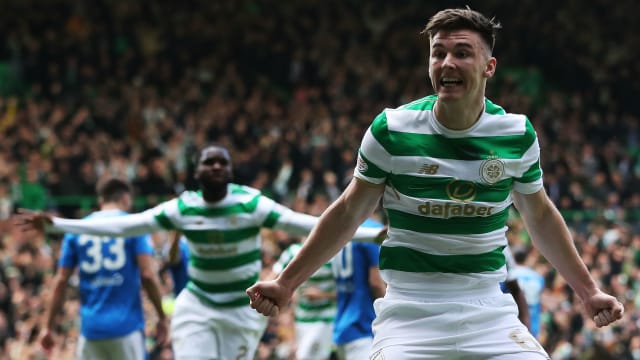 Celtic's Kieran Tierney insists he is happy to remain with the Scottish champions despite rumoured interest from a number of Premier League clubs.

Tierney signed a six-year contract with Celtic earlier in the campaign, and the marauding left-back has become a key cog in Brendan Rodgers' dominant side.

The 20-year-old's form has reportedly drawn interest from a glut of high-profile sides in England's top flight, including Manchester United and Tottenham, but Tierney has no plans to leave Celtic in the close-season.

"If somebody wants to buy you then that means you are doing something right," Tierney said.

"When big teams are looking at you, it's flattering. It's happened during most windows since I broke through. It's good for me.

"It doesn't bother me or distract me because I'm enjoying myself. I'm playing for Celtic, so I'm happy.

"I'm not in any rush at all. I had four years left on my last contract and, if I wanted to leave, I would have chosen to run that down. Instead, when the club offered me six I was happy to sign."

Kieran Tierney does it again! #CelticFC Young Player of the Year! #CelticPOTYpic.twitter.com/50hx65eKRf

Tierney broke through at Celtic under Ronny Deila in 2015/16, winning the PFA Scotland Young Player of the Year before going on to repeat that feat during Rodgers' first season at the club.

He captained the club for the first time in August 2017, netting with a stunning long-range strike during a 5-0 victory over Kilmarnock, and has already gained plentiful experience at such a youthful age.

"A lot of people see me as being older than I am," he added.

"That's three seasons I've been playing regularly for Celtic and that's a long time. But I still see myself as being young and having a lot to learn."