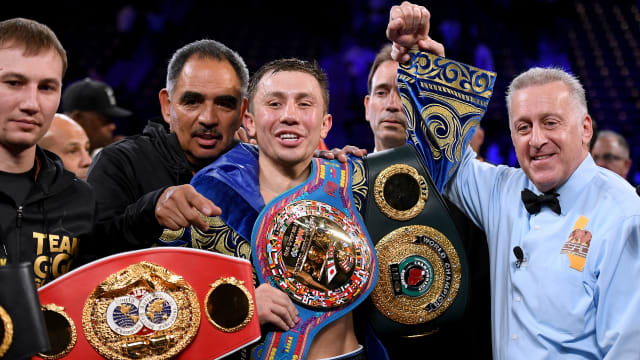 Golovkin delivered a devastating second-round knockout in California after his blockbuster rematch with Alvarez was cancelled, due to the Mexican star receiving a six-month suspension for testing positive for banned substance clenbuterol.

The powerful 35-year-old Kazakh - who improved to 38-0-1 via his 34th knockout after flooring Martirosyan with a brutal combination - previously said he was unsure if there would be a rematch in September.

However, asked if he wanted to fight Alvarez following Saturday's bout at StubHub Center, Golovkin said: "Absolutely. I want everyone.

"I have lots of belts. I challenge anyone to come and take my belts. I don't care who it is. Let's clean the division out. Happy Cinco de Mayo."

Golovkin put his WBA, WBC and IBF titles on the line against Armenian-American Martirosyan,36, in his first fight since last September's split draw against Alvarez.

And there were no surprises as Golovkin unleashed a flurry of punches in the second round that floored Martirosyan face-first and left him down for the count.

It also saw Golovkin retain his title for a record 20th successive time - tying the division mark set by Bernard Hopkins in 2005.

The referee stopped the fight at one minute, 53 seconds and Martirosyan (36-4-1) added: "It was like being hit by a train. It wasn't one punch. It was all of his punches. It was the hardest I have ever been hit."